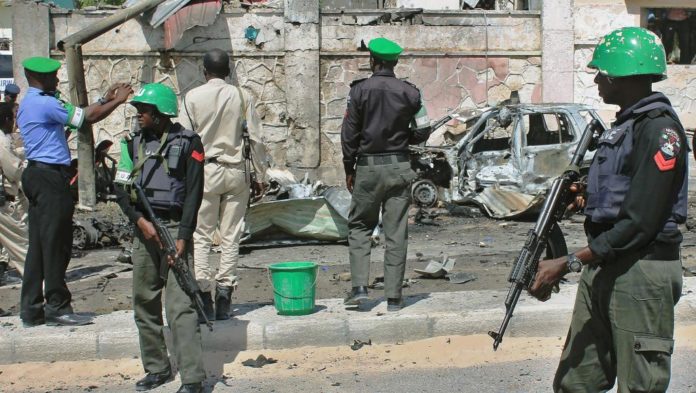 The African Union force in Somalia believes it has managed to stabilise areas of the country under its control despite sporadic attacks from the Al Shabaab terrorist organisation. This is a transitional phase for both Amisom and the Somali National Army, as one force downsizes while the other is to increase its troops.

Amisom, the African Union Mission in Somalia, is progressively downgrading its troops ahead of a full withdrawal due in 2021. The Somali National Army is meanwhile attempting to reinforce its forces in order to control the Amisom territories when that deadline falls. This, however, is a delicate phase that Al Shabaab intends to exploit.

Amisom’s Brigadier General Michael Kabango is the commander of 5,000 Ugandan troops deployed in sector 1 which includes Mogadishu, Banaadir and the Lower Shebelle region. He sat down with RFI’s Sébastien Nemeth in Somalia’s capital, Mogadishu.

What is the security situation in your area?

The situation is stable even though there are still challenges as Al Shabaab has enough disruptive potential. But we’ve noticed a decrease in their activities.

If we go back to 2010, Al Shabaab was holding parts of Mogadishu and their mode of fighting was conventional, that is holding positions and fighting physical against Amisom.

They changed tactics after being expelled from Mogadishu in 2011, 2012. They have gone more into insurgency and applied their most preferred tactics of targeted attacks, using VMIEDs [car bombs] assassinations.

Over time they tend not to occupy areas physically, but function in smaller groups attacking weak targets.

Since then, the security situation in Mogadishu has improved as Al Shabaab has degraded, although from time to time there are car explosions and assassinations.

Al Shabaab still control large areas of the country, allegedly 20% of Somalia. Amisom faces criticism for not conquering more territories and for being stuck in a waiting position.

Al Shabaab is in existence only in the regions we do not have the capability to occupy. Amisom’s numbers have been limited to a ceiling of 20,000 to 22,000. Now it will be reduced to 19 thousand.

The SNA [Somali National Army] is around 10,000 plus. If we can’t occupy an area, then Al Shabaab by default occupies that area.

It is not that we cannot go there but the numbers don’t allow it and the government is still building up its forces.

Of course, means will never be enough but we could do better if we had more helicopters, armoured vehicles, more personnel and if the Somali National Army was increasing at the right pace, then things would be better.

We cannot fulfil our obligations of protecting the population centres because we don’t have the numbers to be everywhere.

One of our objectives is to degrade Al Shabaab but we don’t have attack helicopters. So, when they converge, we can’t move quickly.

The problem is we are in transition. So, now the question should be what numbers should the Somali National Security Forces build? What numbers of police?

But I would say they [the international community] would need to persevere with us and keep the [support] for some time. And they know what we need.

Amisom is supposed to withdraw by December 2021. Meanwhile, the number of your troops are progressively being reduced. Don’t you fear this situation might create too wide a gap in order to keep the same level of security?

We are making progress. Since January, the Somali government has been able to generate over five units of 1,000 men each. That is tremendous. So, as Amisom is losing, maybe we are gaining on the other side. It’s balancing. If they build the capacity, then cutting down on Amisom will not be an issue.

Somali troops are supposed to take over in December 2021. Do you think it is realistic?

If we keep at this pace, it is achievable as long as each of us play their part as we are now.