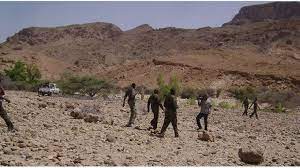 Fighters of the militant group Al-Shabaab launched a dawn attack on Af-urur base, which is home to Puntland regional troops outside the commercial port city of Bosaso on Sunday, triggering a fierce gunfight that lasted for several hours.

The attack started with mortar bombs targeting the base and heavy fighting raged inside the military camp in which both sides exchanged heavy weaponry, VOA Somali quoted residents as saying.

Al-Shabaab said via its affiliated media that its fighters had overrun the heavily-guarded base and killed “many” soldiers, though authorities in Puntland have not immediately commented on the assertion. The group’s media also reported that military vehicles had been seized by insurgents during the assault.

The military camp is located in the village of Af-urur on the Gollis Mountains in Puntland region of Somalia, some 50 miles southwest of Bosaso. Due to its strategiclaly important location, the area has been strongly contested by warring parties during the Somali civil war.

The Al-Qaeda-affiliate carried out a similar attack targeting the base in 2017 during which more than 50 regional soldiers were killed, including base commander Lieutenant Colonel Ahmed Muse Sangal, Lieutenant Colonel Mohamed Salah Jama and Colonel Shire Omar, and wounded 40 others. Insurgents seized weapons and destroyed 14 military vehicles after troops retreated to the nearby town of Armo.

Meanwhile, a base housing African Union peacekeepers in Hiliwa district of Somalia’s capital Mogadishu came under attack early on Sunday, though details on casualties are still scarce.

On Wednesday two fighters of the insurgent group burst their way into the heavily fortified Halane base in Mogadishu airport where they battled AU troops and Somali security forces for hours, killing a number of foreign nationals. Al-Shabaab said it had killed 17 foreigners, including “four senior western officials” – a figure not yet confirmed by authorities.