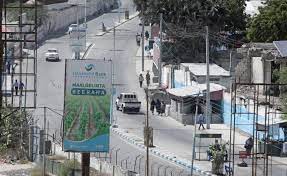 Al-Qaeda-aligned militant group Al-Shabaab mocked the National Intelligence and Spy Agency (NISA) over a tweet on Tuesday in which it said militants had planned assassination attempts on the President and Prime Minister.

An official with the group who spoke to affiliated media said the spy agency has never been able to warn of attacks by the group, and if that is the case, it would forewarn multiple assaults over the past years, including the recent raid on Halane base in Mogadishu and the assassination of Mogadishu Mayor Abdirahman Yarisow at his office.

On Tuesday, Somali spy agency said militants had prepared plots to kill President Mohamed Abdullahi Farmajo and his Prime Minister Mohamed Hussein Roble, who have been at loggerheads over ongoing elections. The warning has sent a shockwave across Somalia, drawing rebuke from former officials and opposition leaders, some accusing NISA of trying to intimidate the Premier.

Al-Shabaab said it would not accept to be dragged into a power fight between the Horn of Africa country’s most powerful leaders, adding that both of them are targets for insurgents.

Former army officers and opposition leaders said on Tuesday that President Farmajo was planning to stage another coup attempt on April 12, though the embattled leader’s office has not yet commented on the assertions.