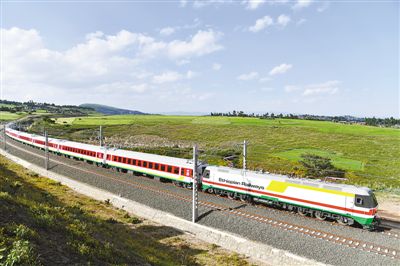 Stretching 752.7 kilometers, the Addis Ababa–Djibouti Railway is the longest international electrified railway in Africa, which has significantly facilitated passenger and cargo transportation for the two African countries of Ethiopia and Djibouti.

As the first electrified railway constructed under the “China Standard,” which brings together Chinese companies’ technical standards, equipment, financing, as well as their expertise in construction, operations, and management, the railway has transported some 130,000 passengers by the end of 2018, shortening the transit time between Ethiopia and Djibouti from over a week to about 12 hours.

Economic development of Ethiopia, which is a landlocked country, has always been affected by transportation difficulties. The railway has opened a route to the sea for Ethiopia, which has greatly improved efficiency while at the same time has expanded the range of Djibouti Port, helping to establish its status as the pivot of the Horn of Africa.

As Ethiopia aims to transform into a manufacturing power by 2025, the country has laid out a construction plan for 14 industrial parks spread across the nation, many of which are adjacent to the Addis Ababa-Djibouti Railway.

The economy of Ethiopia has reportedly maintained an average annual growth rate of about 10%, and infrastructure construction such as the Addis Ababa–Djibouti Railway, which was launched in 2016, has played an important role in that growth.

Meanwhile, Chinese companies have also attached great importance on training for local employees, so that local companies will be able to take over operations within six years.

At present, the Chinese side has more than 600 employees on the job, and more than 1,000 local operators in Ethiopia and Djibouti. It is estimated that about 3,000 local employees will work on the railway in next three years.