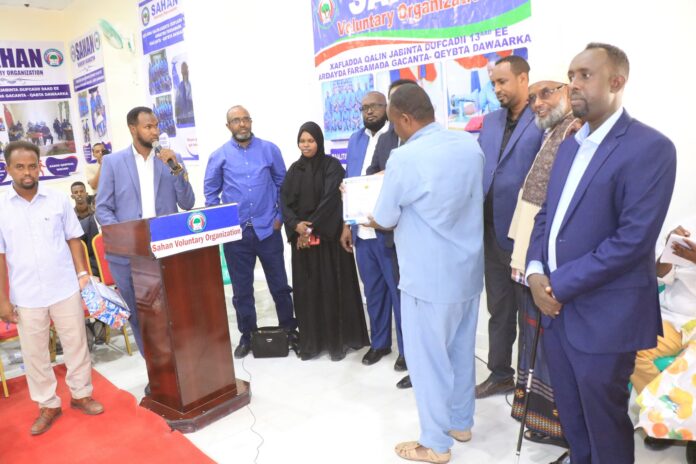 A high-level event was held for patients recovering from mental illness, who were taught various skills was held on Tuesday at the SAHAN hospital.
SAHAN Hospital which started treating and caring people with mental illness in Hargeisa, years back, had farewelled its 13th batch this week.

The Centre, which is the largest, of its kind in the Horn of Africa, provides care for people with mental illness, who come from different countries in East Africa and the rest of the world.
When patients recover, they are taught the skills to work and feed their selves & families, such as tailoring, carpentry, lighting, learning the Somali language, the Holy Qur’an, and other important skills.
The graduation ceremony was attended by former Somaliland Vice President HE Ahmed Yusuf Yasin, Deputy Minister of Education Abdihakim Said Bustale, Chairman of the Good Governance and Anti-Corruption Agency Mr. Liban Ismail Ali, Director. Ministry of Family Affairs Department Filsan Hussein, Hargeisa City Council members, politicians, doctors, traditional elders, parents, and the administration of the center.

Speaking at the event, parents and families of the patients thanked the management of SAHAN Hospital for their efforts in improving the center’s services and called on the government and the community to support the hospital.

Bashir Mohamed Jama, the chairman and founder of SAHAN Hospital for the Treatment of Mentally ill people, described the center’s progress and current status and said that the administration will continue its efforts to improve the center and called on the Government Agencies to assist in the continuation of treatment and care for people with mental illness.

“The people we care about at the center, some of them has cut off their genitals. They really need help. We call on the government and the local government to help them.”
Former Somaliland Vice President HE. Ahmed Yusuf Yasin, who laid the foundation stone for SAHAN Hospital 13 years ago, praised the management of SAHAN Hospital for their efforts to improve services. Ahmed Yusuf Yassin called on the community and the government to support the Hospital, which is executing an important task that only governments could fulfill.

Lawmaker Jamaal Osman Abdillahi and Hargeisa City Councilor Sikawi pledged their support to the SAHAN Center and as a local government plan to offer a budget for the Hospital.

Liban Ismail Abdillahi, deputy chairman of the Good Governance and Anti-Corruption Commission, and Filsan Hussein, director of social affairs at the Ministry of Family Affairs, praised the management of the Center for improving services at the hospital and urged the Government and the community to support.

The Director of the Social Affairs Department at the Ministry of Employment, pledged at the event to help the hospital create jobs for the patient who got cured at the center, and suggested that SAHAN Hospital set up a care center exclusive for Women with mental illness.

At the end of the event, the Deputy Minister of Education, Abdikarin Said Bustale, concluded his remarks by pledging his support for the development of the SAHAN Center.

Finally, certificates and awards were presented to some of the hospital’s most successful students who testified to the achievements of SAHAN Hospital and showed the positive attitude of the staff of the Center during their time.