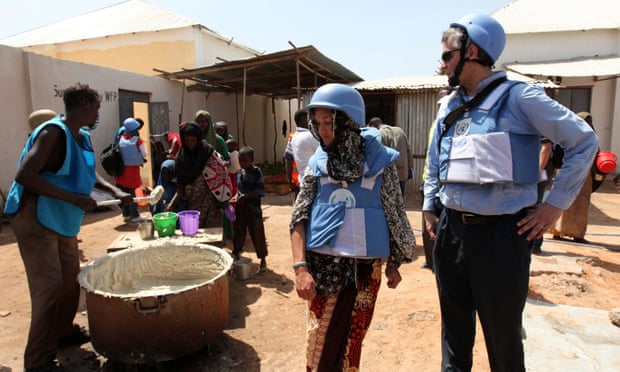 When Sahra Koshin first returned to Somalia from the Netherlands in 2008, she was full of hope and courage.

Eager to use her expertise in gender development to rebuild her wartorn country, she immediately started work with one of the many UN agencies in Mogadishu.

“The moment I stepped into the compound, I saw the physical difference of power and influence,” Koshin says.

“The offices of the international staff were separate and well furnished, they even got fridges, had their own toilets and other accessories, while those of the Somalis had none and we shared only one toilet.”

It was, she says, “just a glimpse into an institutionalised exclusion of Somali nationals from the table of decision-making in the country’s aid sector”.

For more than 10 years Koshin worked with different UN agencies and international NGOs. She claims a two-tier system exists, with Somali nationals seen as tools for project implementation rather than as people with knowledge.

“We had no means of contributing to the agenda of the day,” she says, referring to her days at the UN. “Every time we joined teleconference meeting with the Nairobi regional office, we had to just listen to items that were prepared without our knowledge.”

Other Somalis working with international aid organisations interviewed for this article voiced the same concerns. Not wishing to be named for fear of losing their jobs, they said they felt their voices are not valued and that they are excluded from taking ownership.

The Somali Congress of Trade Unions (Scotou) says it frequently receives complaints from Somali aid sector staff who talk about lack of respect and unfair treatment by foreign managers.

“It is difficult to access these international organisations,” says Scotou general secretary, Ahmed Hassan. “They are based inside Mogadishu airport, which is heavily guarded; there is nothing much we can do to advocate for the rights of local workers. Somali staff members, especially casual workers who report to the base every day, are not even allowed to use their mobile phones at work for security reasons, which means they cannot call their family members even in an emergency. This is unacceptable.”

Somalia’s fragile government is recovering from a decades-long civil war and is under frequent attack from the al-Shabaab militia group. Last month, militants attacked the ministry of labour, killing 11 people including deputy minister, Saqar Ibrahim Abdalla. 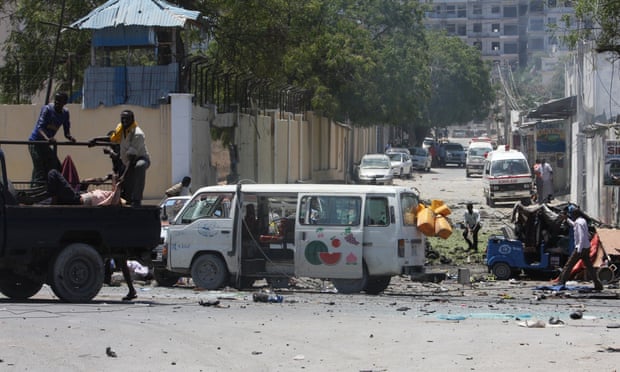 Somali security forces evacuate the injured from the scene of an explosion after a suicide bomber blew up his explosives-laden vehicle near the education ministry headquarters in Somali capital Mogadishu on April 14, 2015. Photograph: Nour Gelle Gedi/Anadolu Agency/Getty Images

“The lack of strong government and the absence of an independent NGO regulatory board contributes to the exploitation of workers. The ministry of labour has recently finalised the development of a new labour law which if passed will protect and greatly contribute to the welfare of workers,” says Hassan.

Experts say the lack of local participation in the design and development of aid programmes is a key reason for their failure. In a report on the 2017 pre-famine response in Somalia, the Humanitarian Policy Group (HPG) at the ODI found that “INGO staff participants indicated that their HQ offices would often send them proposals based on the donor area of interest, with field staff tasked with implementing assessments or activities (having) little room for adjustment.”

This was “confirmed by surveys by Ground Truth Solutions in 2017, which found that a quarter of respondent field staff did not believe that affected people were able to influence programme design, and that the views of affected people were not considered because of a lack of engagement and consultation by aid agencies”, said the HPG.

Researcher Badra Yusuf said national staff often feel excluded. “They also seem to take the burden of all the field challenges which often amounts to outsourcing workload and problems,” she says.

“Often the failure of programmes are attributed to things not working well in the field when actually people fail to consider the risks and causes of failures that could have being avoided if proper planning with national staff and communities were made at the planning stage.” 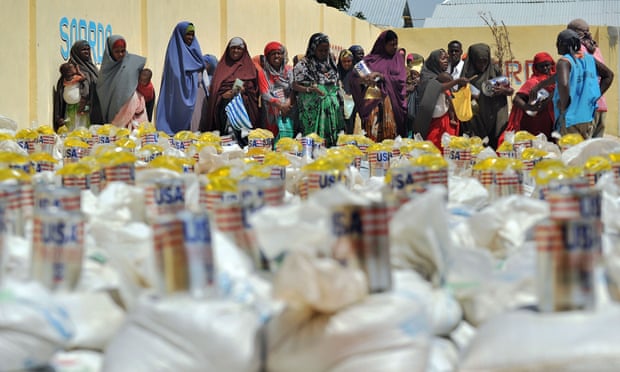 Displaced Somali women queuing for food-aid rations at a distribution centre during a visit to assess the progress of relief efforts by UN Office for the Coordination of Humanitarian Affairs [OCHA] in Mogadishu in 2012 Photograph: Tony Karumba/AFP/Getty Images

Koshin, now an independent consultant, said there is a culture of acceptance: “They [Somali staff] know they are being mistreated but cannot say anything. I decided not to work with the UN agencies under such a humiliating environment.”

While organisations emphasise the importance of local engagement, Koshin says they isolate staff who could serve as a bridge into communities.

“There is always an international staff assigned to supervise Somali nationals regardless of their capacity, position, experience or level of education,” she says. “They assume that we are not competent enough to execute our duties and the fact that we are Somalis we are bound to make mistakes therefore, there is always that white or non-Somali looking after you, watching and correcting your mistakes.”

In November, Fadumo Dayib, a former presidential candidate, accused the UN in Somalia of systemic discrimination against Somali staff. She resigned as UN Women Somalia country director in October.

“Upon reporting for duty in Somalia I was told no Somali was allowed to hold such a position. I was verbally harassed, bullied and ostracised. I spent a hellish one year and six months dealing with this,” she tweeted.

“Apparently, a Somali by virtue of her/his ethnicity, is a terrorist, works in cahoots with the government, is corrupt and biased. They might as well as put a sign saying: ‘No Somalis and dogs allowed,’” she added.

“To them, we are just like beneficiaries, regardless of our capacity,” says one Somali INGO staff member. “We always see projects that do not reflect the needs of the community but we don’t have the platform or opportunity to correct or shape anything. International staff overlook our capacity and that is why many relief programmes in the country are not sustainable.”

Joe Contreras, spokesman for the UN mission in Somalia, said the two UN missions and 21 agencies in the country employed 1,300 Somali nationals and many ran staff associations to represent their interests. He insisted UN leadership “routinely” travelled outside Mogadishu’s airport compound.

“In many agencies, national staff participate in senior management meetings, take part in organisational planning, and are included in high-level decision-making platforms for discussions on the strategic direction of the organisations,” he says.

“A number of Somali national staff have been recruited into international posts in other countries. Given the international character of the UN, representative and director-level posts across all UN countries are hired based on international recruitment.

“The UN resident coordinator office is not aware of any efforts by referenced ‘local labour rights groups’ in Mogadishu to reach out to the UN to discuss on issues of this nature, and would be very pleased to do so.”