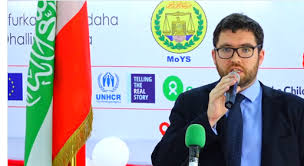 The Head of UK liaison office in Hargeisa has cried foul over the deteriorating political situation that Somaliland has faced with.

Mr. Stuart Brown has expressed his concern over the detention of two opposition officials in which Somaliland government has put them behind bars.

He called on Somaliland gov’t to bring charges or release them without further conditions.

Mr. Stuart has encouraged the political parties to come to the negotiation table and restart the stalled talks which are aimed at ending election squabbles.

He said that the parties must renew dialogue and uphold their commitment to hold parliament and local polls without further postponement.

UN Special Envoy to Somalia, Honorable James Swan, in a speech to the UN he called on Somaliland authority to respect the freedom of speech.

Speaking on the stalled Somalia-Somaliland dialogue, Mr. Swan has encouraged both administrations in Mogadishu and Hargeisa to focus on addressing the needs of the populace. He called on both sides to accept with open minds the ongoing efforts which are aimed at resuming the stalled talks between Hargeisa and Mogadishu.

The statement from the UK and UN special envoy coincide at a time when Somaliland government locked horns with opposition parties over wrangle pertaining to the controversial nominees for the National Election Commission which sparked Wadani party to organize a rally across the country.