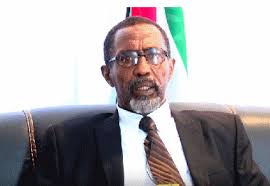 Somaliland government has responded to the formation of a new rebel group in Buuhoodle district of Togdheer region. The minister of public works and Housing, Abdirashid Haji Duale, said the insurgency declared in Buuhoodle is at business venture undertaken by war profiteers.

The minister called the new insurgency group announced in Buuhoodle s a private initiative led by people seeking fortune. He added that the group is led by individuals who are seeking profit and are funded by individuals in Mogadishu and Addis Ababa.

Minister Abdirashid Haji Du’aale said the Buuhoodle district had in the past suffered from the scourge of war with hundreds of lives lost and hampered development. He lamented that people from outside Buuhoodle often took Buuhoodle a base for their individually motivated violent adventures.

The minister said it was time for the people of Buuhoodle to resist those individuals who want to drag them to a war with their neighbors. He said it is unacceptable that few individuals to take the whole district of Buuhoodle hostage for their own private gain.

This came just a day after a rebel group named SSC was announced in Buuhoodle and its leaders vowed to unite what they called Sool, Sanaag and Cayn regions in an administration independent of Somaliland. Somaliland