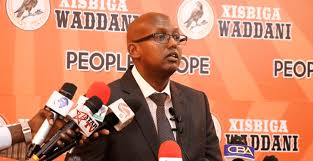 The consumption of Khat across Somaliland has reduced as the government imposed a ban on the stimulant drug last month of fears of the spread of Covid-19. Experts expressed fears that Khat will play a crucial role in the transmission of the novel coronavirus. But smugglers are still trying every possible means to import the drug which is popular and widely consumed across Somaliland. When the ban was imposed, there was no specific guideline on the punishment that will be taken against the individuals that break the new law. The main opposition party Wadani yesterday said that the recent incidents indicate that Somaliland is sliding into some form of dictatorship. The secretary general of Wadani party, Khadar Hussein, said the police have no authority to take over private property. Khadar said: “We should not be using the pandemic as further form of intimidation and illegal arrests. We know that vehicles owned by Khat traders have been illegally taken over by the police. The decision was illegal. Khat is not categorized as a drug in Somaliland. It does being stopped temporarily because of Covid-19, just like other  measures that has been taken by the government.” He further added that action has been taken by the government in the past can be termed as dictatorial. Kadar Said: “We have seen many people who have illegally detained and many others who rights have been violated.” Since Covid-19 was reported in Somaliland, the government took drastic measures including banning the importation of Khat from Ethiopia. The decision has been welcomed by experts who argue that this would lower coronavirus infection in the country.