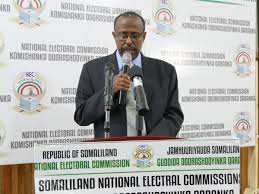 For over two years, the people of Somaliland have been wondering whether this current elections commission are sincere to the democratic process. Yesterday, we got the answer.

In a press conference devoid of shame or any self-respect, they stood in front of the people of Somaliland and said “there is not enough time to hold free and fair parliamentary and local elections!” Are they serious?

This discredited commission blamed everyone except themselves. “We told the government in January, 2018 that there could be significant hurdles” “We are here by law and shall leave by law” ” We are not to blame, the blame lies with the political parties, the Houses of Parliament, the administration, the donors, the stakeholders, the old lady who sells tea near our offices!”. GET OUT!

If one has any self-respect and finds that no one is willing to work with you or you are unable to do the job, then have some dignity and resign. Allah will provide, as always. Allahu Baraka Fii.

Do they need the job that badly? Five years they have been drawing good wages, and you can see how much fatter and elegant they have became, and in all those five years, they had held a solitary election!

Most of the preparatory work of that election was done by the previous commission. For five years, they sat at their table, fiddling the expenses and other donations from our friends, ( and we know exactly what these friends think of Somaliland now), and drinking tea, eating at the most salubrious hotels and restaurants, travelling here and there, and what have they got to show for it. NOTHING. ZERO. GET OUT!

We in Somaliland seem to be going around in circles, politically. We have a House of Representative who mandate expired nine years ago and has been sitting for 14 years! We have a House of Elders who have been sitting for three decades. We have an administration and judiciary that are not being held accountable. We have community elders running amok, raising militia, interfering in government business. We have renegade Colonels hiding in the mountains. We have our heroic armed forces being hunted down with impunity. We have friends and supporters across the globe reaching exasperation point. What is going on!

If as these hopeless commission members state, “that they are here by law” and will not resign for the sake of the nation and for their own self respect, then the people of Somaliland will have to take action. Peaceful and democratic action.