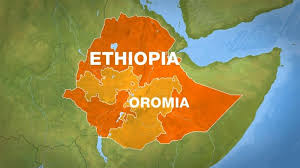 It was not clear who carried out the attack or why the family was targeted, but militias formed by ethnic groups are proliferating across Ethiopia.

The violence is threatening sweeping political and economic reforms undertaken by Prime Minister Abiy Ahmed after he took power in the Horn of Africa country in April last year.

Admasu Damtew, head of communication in Oromia, said the attack took place early in the morning and the dead were all from the same family. Federal police and the military had been deployed to the area after the killing, he said.

The attack took place in the town of Bordede, in the Gumbi Bordede district, his office said in a statement.

While Abiy’s reforms have brought new political freedoms, old state border disputes have resurfaced. Large ethnic groups that dominate in many regions are demanding more territory and resources. At the same time, smaller groups, tired of being sidelined, are pushing back.

Oromia was a hotbed of the protests that propelled Abiy to power, but it is also one of the areas where he has struggled to keep the peace.

(The story corrects the location in paragraph five to say .. in the town of Bordede ..not.. Gumbi Bordede Woreda)