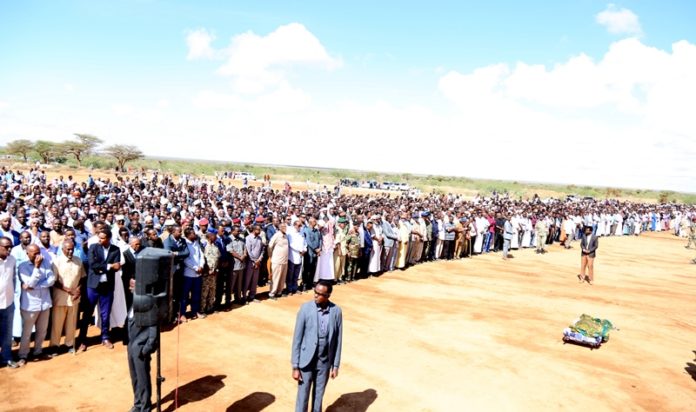 The grand centenarian whose lifetime is amongst the most celebrated in the land, the late veteran politician and leader who was rightly the most reputable in the Upper House of Elders (The Guurti) Haji Abdikarim Hussein Yusuf was laid to rest at Toon Centre yesterday in a state burial befitting his milestone legacy. He passed away on Friday in Hargeisa.

The President of the Republic H.E. Musa Bihi Abdi who led the mourners at the burial made a brief obituary at the graveside in a send-off that brought together most of who-is-who in the nation’s political, social, public and private sectors officialdom.

Most notable was the President’s predecessor H.E. Ahmed Mohammed Mohamud Silanyo who flanked his successor.

Said the Head of State, “The life history of the deceased can not be just outlined in a simple brief”.

He described the late Haji Abdikarim Hussein as grand leader and elder who devoted most of his life in the cause of peace, stability, cohesion and harmonious communal settlings. The president observed that his words were largely with wisdom and mostly specially phrased literary.

He prayed for the soul of the departed late grand centurion who was believed to have lived for about a century and a quarter to be blessed in Paradise (Jannatul Firdowza).

The multitude of the mourners was the largest in the country since the late President Egal was buried earlier in the millennium. Those who thronged the burial included ministers, politicians, traditional leaders and ambassadors from neighboring countries.

All the service commanders, leaders of opposition, MPs, traditionally and contemporary leaders, prominent entrepreneurs, and a multitude of mourners amongst them bereaved members of the family, relatives, friends and admirers of the late leader were in attendance.

Of note was the fact that the President quipped that all Somali speaking people in different lands and foreigners who worked with Somalis were acquainted to the late leader.