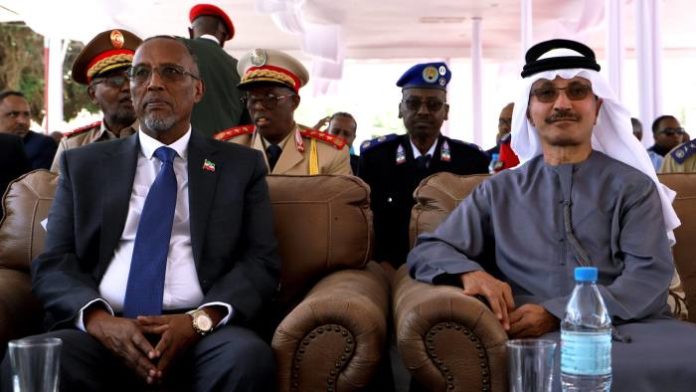 Please use the sharing tools found via the share button at the top or side of articles. Copying articles to share with others is a breach of FT.com T&Cs and Copyright Policy. Email licensing@ft.com to buy additional rights. Subscribers may share up to 10 or 20 articles per month using the gift article service. More information can be found here.
https://www.ft.com/content/f48e5a18-d130-11e8-a9f2-7574db66bcd5

At the Berbera container port in the internationally unrecognised state of Somaliland, employees of Dubai-based DP World unload 40-foot crates from a hulking cargo ship as more vessels wait on the horizon. The facility on the Gulf of Aden has been operated by DP World for about a year, with the company set to invest $442m in an expansion project that would more than quintuple the capacity. That a global port operator is preparing to spend such a large sum in a state that is not recognIsed by the UN or anyone else is a stark example of the political and commercial battle taking place in the under-developed Horn of Africa — a gateway to lucrative trade routes through the Suez Canal and the fast-growing markets of Africa. It is also a testament to the relative stability that Somaliland’s isolated government has achieved since breaking away from Somalia 27 years ago.  “More and more cargo is moving from Europe to the Far East and every ship passes in front of Berbera,” said Sultan Ahmed bin Sulayem, DP World chairman and chief executive, at a colourful groundbreaking ceremony this month in the Somaliland capital, Hargeisa. “Berbera is going to regain its [role] as a hub and an important port in a very important maritime transportation route.” The Red Sea corridor that separates the African continent from the Arabian Peninsula has long been fought over by global powers. Britain established the Protectorate of Somaliland in 1888 to help it control the shipping routes from East Asia through the Red Sea to the Suez Canal. Later, after independence in 1960 and the ill-fated union with Somalia to the south, both the US and Russia built sections of the current quay at Berbera. G2602_18X Somaliland to Suez Canal map The new DP World investment comes at a time when Middle Eastern states including the United Arab Emirates, Saudi Arabia, Turkey and Qatar are projecting greater political and economic power in the Horn of Africa region. This year the UAE pledged $3bn in aid and investments to Ethiopia and played an important role in negotiating a historic peace deal between the country and its neighbour Eritrea.  Muse Bihi Abdi, president of Somaliland, and Sultan Ahmed bin Sulayem, chairman and CEO of DP World attend the signing ceremony for the expansion project of Berbera port © Reuters The UAE has also extended its military reach by building a naval base at the Eritrean port of Assab. It has similar plans for Berbera, where it is constructing an Emirati air force base and a harbour. The facility is just five miles from DP World’s port, though the company said there was no connection between the military agreement and their commercial investment.  Saad Ali Shire, Somaliland’s foreign minister, said: “The Red Sea corridor has always attracted superpowers because of the importance of the maritime lane.” He added: “What attracts them is not new — what’s new is the new states that are now more powerful, more wealthy. They want to be seen, they want to flex their muscles.” DP World is a big international company who dared to come to Somaliland and I hope a lot of other companies from other countries will follow Muse Bihi Abdi, Somaliland’s president Part of the prize at Berbera is its proximity to the fast-growing economy of Ethiopia to the west. Ethiopia’s gross domestic product has risen tenfold in the past 15 years to more than $80bn but the landlocked country relies on a single port in Djibouti to manage more than 90 per cent of its trade.  To reduce this dependence Addis Ababa this year announced it would take a stake in Berbera alongside DP World and the Somaliland government. But DP World’s Mr Sulayem said Ethiopia and the wider region still needed a further ten modern ports at least to keep pace with expected economic growth. DP World’s commitment to Somaliland is driven, in part, by the collapse in its relations with Djibouti to the north, where until this year it ran the Dolareh container terminal, the only modern port along this section of Africa’s coastline. In February, Djibouti seized Doraleh after accusing DP World of deliberately under-using the port in favour of Berbera and other regional terminals. Yet the push into Somaliland, is not without risk. The government in Somalia to the south opposed the DP World deal and as long as Somaliland’s independence is not recognised, Berbera remains part of Somalia under international law. Muse Bihi Abdi, Somaliland’s president, said Somalia had no power to interfere with its ports or boundaries and that DP World’s investment would help the country to achieve international recognition. Somaliland declared independence from Somalia in 1991 but despite achieving relative peace and stability and holding regular elections, it has struggled to attract investment given its status as an unrecognised state.

Please use the sharing tools found via the share button at the top or side of articles. Copying articles to share with others is a breach of FT.com T&Cs and Copyright Policy. Email licensing@ft.com to buy additional rights. Subscribers may share up to 10 or 20 articles per month using the gift article service. More information can be found here.
https://www.ft.com/content/f48e5a18-d130-11e8-a9f2-7574db66bcd5

“DP World is a big international company who dared to come to Somaliland and I hope a lot of other companies from other countries will follow,” Mr Abdi told reporters in Hargeisa.  The partners plan to establish an economic area next to the port to attract manufacturers in the mould of the Jebal Ali free zone in the UAE, which hosts some 7,500 businesses employing more than 150,000 people.  Walking the crumbling streets of Berbera, such plans seem ambitious. But the Somaliland government is steadfast. “We will continue to build our country in different fields, to attract the other members of the UN to recognise and co-operate with us,” said Mr Abdi. “That is our way.”