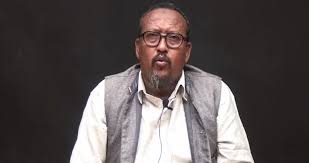 HARGEISA— A parliamentarian by the name of Mr. Mohamed Ahmed Dhakol who is elected from Sool province has demoted 18th of May which Somaliland commemorates every year as it marks the recapture of its lost independence.

The MP has said that 26th June which has special distinction whereby the first flag was hoisted in the Somali speaking territory.

Mr. Dhakol who is very outspoken MP has gone on to say that the 18th of May is celebrated by group of Somaliland citizens but not marked by all citizens.

He argued that the 26th of June is more overriding as it is a symbol which clearly identifies the national date the country took its independence from Great Britain.

He added that the independence day proclamation which coincides on the 18th of May is not a national day but it is a feeling  that Somali National Movement (SNM) wants to express.

He said that there are individuals who believe 18th of May as the day that they have fled from their residences.

He also spoke of the notion that the incumbent president must come with a new plan which paves the way for Somaliland belonging to all but not just a particular group.

He defended the current house chair against criticism of his leadership made by UCID chairman, Faisal Ali Warabe. He told UCID chair that he has to stop scathingly blasting on the process that MP’s elected from Sool province where selected.

The parliamentarian has also echoed a doctrine that the Somaliland scholar Mr. Ahmed Ismail Samatar lobbies for which calls on changing the national day from 18th of May to 26th of June.