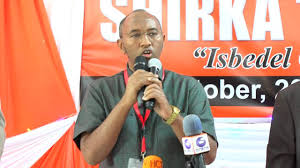 In a press conference Hersi Haji Ali Hassan, the leader of Waddani, today announced that his party withdrew from the agreement reached by the political parties over the composition of the National Electoral Commission.

“Starting from today, this agreement is not binding on us,” Hersi said.
“But we are ready to return to the negotiation table if the other party wants to honour the agreement,” he added.
He accused the ruling party of violating the terms of the agreement.
The political parties agreed to increase the members of the National Electoral Commission to nine. Currently, the members of the Commission are seven.
The decision comes after the House of Representatives rejected yesterday a bipartisan motion submitted to turn the terms of the agreement into law.
The ruling party said the decision of the House isn’t their fault and it was part of the agreement to refer it to the House.