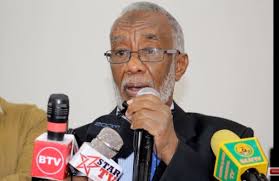 Somaliland says several African countries have expressed their desire to recognize the country as an independent state.

Speaking during a webinar hosted by the Somaliland Liaison office in Nairobi, Haji did not name the countries for diplomatic reasons but gave a clear hint that Africa supported the nation’s course.

“We are confident that sooner or later we have no doubt we will be recognized. We are in contact with a good number of African countries who are aware of our situation and who we hope will take a lead in helping us push recognition,” said the minister during the webinar to mark 60 years since the country gained independence from the British.

Among the panellists in the webinar were Dr Edna Adan the former foreign minister Somaliland, Ambassador Mahboub Maalil Former Executive Secretary of IGAD, Horn of Africa Analyst resident scholar American Enterprise Institute Michael Rubin Martin Jay who is an award-winning British journalist and correspondent for the Daily Mail (UK), Abdirahman Ismail who is a consultant on investment in the Energy Sector and Ambassador Bashe Omar who is the head of the Somaliland Liaison office in Nairobi.

The minister said Somaliland has several options in her push for international recognition including lodging a case at the international court.

“We are weighing all options, and we will not relent,” he said.

He said the current talks between Somaliland and Somalia in Djibouti is a step in the right direction but the international community need to take a more leading role in ensuring the talks yield good results.

Ambassador Bashe said the international community has made efforts to media in conflicts involving other countries and this should be done also in the talks between Somalia and Somaliland.

Bashe cited the case of Sudan and South Sudan and Ethiopia and Eritrea in the past and stated the Somalia and Somaliland case is not unique.

Dr Edna challenged the United States to show more commitment to bringing peace in the Horn of Africa region.

“America is showing renewed interest in the horn of Africa which is good because, for years, their foreign policy with regard to the Horn of Africa has failed,” she said.