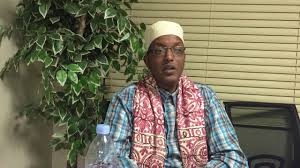 The Supreme Awdal traditional elders have condemned with the strongest possible terms the apprehension of Sultan Abshir by Somaliland authority in Borama.

Abdirashid Roble, one of the traditional chiefs has regretted that Sultan Abshir was arrested for airing his views.

He said this was part of an ongoing onslaught against the people of the coast areas of Awdal  province.

“Today I heard that Sultan Abshir was taken into police custody.He is the grand sultan. I extremely regret that.” said Abdirashid

He was against mining activity which is underway in the province.

His supporter staged peaceful protest to show their grievances against the security forces.

One protester was injured during the clashes once police tried to disperse the crowd.