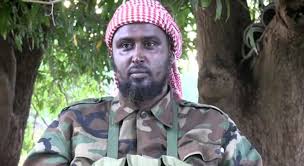 The Spokesman of deadly Al Qaeda affiliated extremist group of Al Shabab, Mr. Sheikh Ali Mohamud Raage a.k.a. “Ali Dheere” has been reported of being injured in an operation that the Somalia National Army conducted at Shaam settlement in Lower Shabelle.

The SNA carried out the operation on the 11 of August, 2019, which was aimed at flushing out Al Shabab from the control of Awdhiigle in the Lower Shabelle region.

This was quoted from the State affiliated media outlets from Somalia.

Mr. Ali Dheere is reportedly taken into nearby areas of Kuntu Waarey which is under the control of Al Shabab.

There are no official sources confirming the injuries of Al Shabab spokesman besides the claim made by the gov of Somalia.

The Al Shabab run radio known as Radio Andalus aired a voice clip in which its spokesman delivered a speech on the advent of Eid Al Adha.

There were several times once it was claimed that AL Shabab spokesman has been wounded in operations.