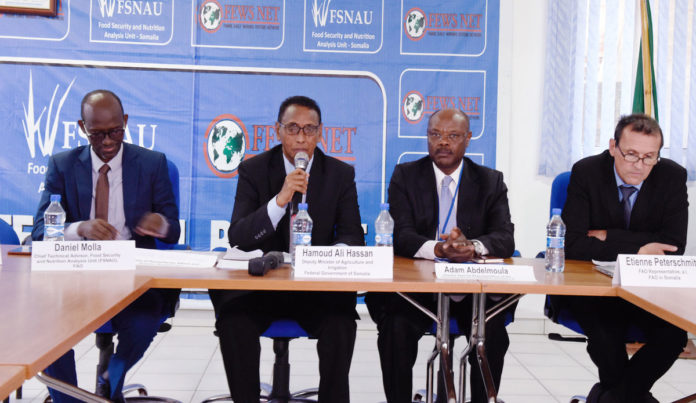 Mogadishu – Somalia’s federal authorities and the United Nations (UN) are calling for urgent humanitarian assistance to avert an acute food insecurity situation that could threaten millions of people.

The call was made during the launch of the post-Deyr (October – December) seasonal Food Security and Nutrition Assessment for Somalia on Monday.

The periodic assessment is conducted twice a year by the Food Security and Nutrition Analysis Unit (FSNAU) and the Famine Early Warning Systems Network (FEWSNET), both of which are managed by the Food and Agriculture Organisation (FAO) of the UN, in collaboration with various partners and governments.

The assessment notes that up to 1.3 million people in Somalia face acute food security and require urgent humanitarian assistance. At the same time, more than 690,000 children below five years of age could become acutely malnourished by the end of the year.

The UN Resident Coordinator and Humanitarian Coordinator for Somalia, Adam Abdelmoula, said that humanitarian needs persist despite favourable Deyr rains that improved the food security situation across the country.

“Approximately 4.1 million people across Somalia will continue to face acute food insecurity through mid-2020, including 1.3 million people who need urgent humanitarian assistance. Over 962,000 children face acute malnutrition, including 162, 000 who could become severely malnourished through this year, if their needs are not addressed,” said Mr. Abdelmoula.

He also noted that although the recent desert locust invasion in Somalia had been limited and localised, it carries a high risk of damage to crops.

“These concerns add to what is already one of the biggest and most complex emergencies in the world today. About 2.6 million people remain internally displaced and highly impoverished. They need to be better protected and supported in finding durable solutions,” the senior UN official said.

“The problem in Somalia is not only because of rainfall. It is due to insecurity and lack of infrastructure, which affects the movement of people between member states. Insecurity is a contributing factor,” the deputy minister noted, further appealing for support from international partners.

The FAO representative in Somalia, Etienne Peterschmitt, concurred that the country has experienced multiple challenges, such as poor Gu rains (the season running from April to June) compounded by the recent invasion of desert locusts. Mr. Peterschmitt pointed out that this complex issue requires concerted efforts to contain.

“If the locust [invasion] does hit the cropping or grazing areas at the worst time, the damage can be huge, up to a 100 per cent,” Mr. Peterschmitt said. He added that, considering where the invasion is located at the moment, it would not necessarily mean that the plague will affect all parts of the country, but nevertheless reminded all partners to be prepared.

Daniel Molla, the FSNAU Chief Technical Advisor, noted that forecasts by the Intergovernmental Authority on Development (IGAD) indicate that most parts of Somalia will register favourable Gu rains this year, except in northwest Somaliland, which may experience below average Gu rains that could negatively impact on crop and livestock production.

“We also have to consider the prospects for the Gu season rainfall that is ahead of us; and the forecast for the IGAD indicates that average and above-average rainfall is expected in most parts of Somalia,” Molla said. 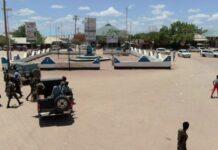