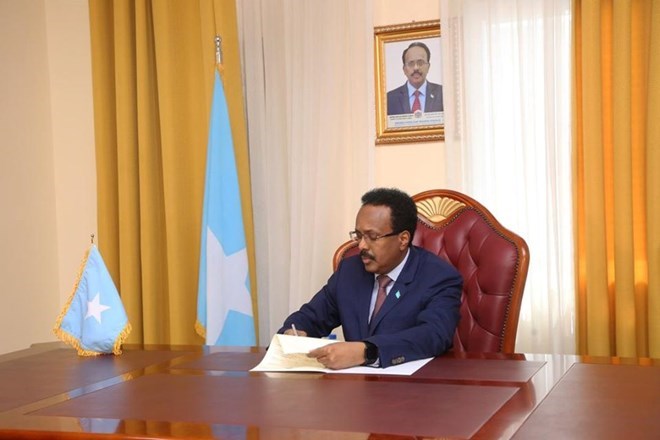 Three days after the meeting between the Presidents of Somalia and Somaliland in Addis Ababa, Ethiopia, Somalia leader Mohamed Abdullahi Farmajo has officially apologized for the atrocities against the people in Somaliland during the war in 1991.

Speaking during the conclusion of the annual judiciary conference in Mogadishu, President Farmajo apologized for the atrocities against what he called our brothers in the North.

“It is imperative that we correct black chapters in our history. That which was regrettably incurred against the northerners needs to be acknowledged. An apology is due to the north as the national President and I need that you (Somalians) do so with me,” Farmajo said.

“I convey our regrets to the dead, the wounded, the traumatized,” he added.

“Somalia did not invade the north. What happened was not clan-driven. A system carried it out,” he said.

This is the first time that a president of Somalia apologized for the atrocities committed by the Somali government in the 1980s against the people of Somaliland.

The apology came after Farmajoo and Somaliland President Musa Bihi met in Addis Ababa after the conclusion of the 33rd Africa Union summit.

It is not clearly known what the two leaders discussed but the meeting broke the ice setting stage for dialogue between the two erstwhile united nations.

Somaliland which united with Somalia after gaining independence from the British withdrew from the union after the start of the 1991 civil war and declared its own independence from Somalia. The country has since then been pushing for international recognition but Somalia has ensured this does not happen to claim the former remains part of its regions.

However, tension and mistrust between the two countries has prevailed over the last three decades.

Somaliland government is yet to react to Farmajoo’s apology.