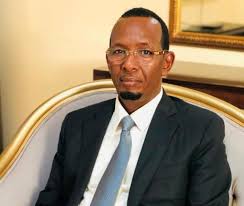 Somali Affairs reports that in an interview with the Saudi-owned, Arabic Al-Arabia TV, Sanbalolshe, Ex-Somali Intelligence Chief, said Qatar has kept alive its contacts with Al-Shabaab for years, and that the Gulf country has been instrumental to the terror group in its drive to generate income from ransom payments.

However the appearance of this interview, by ex-Somali Intelligence Chief, on Saudi-owned Al-Arabia raises questions about the credibility of Sanbalolshe’s claims since relations between Doha and Riyadh are tense and a narrative war is continuing for past several years.

Sanbalolshe’s – ex-Somali Intelligence Chief – claims are also problematic because most of the Italian and Turkish sources have given credit to Turkish Intelligence, Italian and Somali government agencies for mediating this release.

In Italy the furore is rather focused on Silvia Romano’s claims that she has become a Muslim after carefully reading Quran and her new name is Aisha. She claims and explains to Italian prosecutors that there was never any pressure upon her and she was not physically abused by her captors. Aisha is the most popular Muslim name – coming from early days of Islam when the youngest wife of Prophet of Islam, Mohammad (PBUH) was Aisha or Ayesha.

Sanbalolshe, the former head of the Somali intelligence agency (SIA) says that: “Allegations of Qatar having ties and relations with extremist groups and its financial support to fund their activities isn’t new” He argues that Qatar has been a main sponsor of Al-Shabaab for a decades. It uses many tricks and channels to provide financial, logistical and intelligence support.

Ex-Somali Intelligence chief adds that one of the main ways, Doha uses, is working through a group of individuals who are currently in the Somali government particularly the intelligence agency. In Somalia, no one knows whether Qatar can be considered as friend of foe but for sure it has been a seed and force for instability and chaos,” said Sanbalolshe. However the comments coming at this stage look suspect – since Sanbalolshe has been heading this intelligence agency himself.

Sanbalolshe, the former head of the Somali intelligence agency (SIA), also say’s that the current leadership of NISA serves as a middle man between al-Shabab and Qatar.

Sanbalolshe also said Al-Shabaab has been carrying out operations to further the interests of the Gulf country in exchange for its financial support.

Ex-Intelligence chief accuses that “Ransom is not the only source of funding for Al-Shabaab, but one of the many avenues. The group carries out attacks on behalf of Qatar inside Somalia and outside in exchange for significant financial resources.”

Sanbalolshe further adds that: “By some estimates, Al-Shabaab raises up to $400 million annually. A significant part of that comes through extortion in the form of taxes levied on residents of Mogadishu, sometimes on the explicit endorsement of government officials who are secretly working with Al-Shabaab.”

Allegations of cooperation between Qatar, officials in the Villa Somalia administration and Al-Shabaab have been persistent, although both Mogadishu and Doha have vehemently denied them.

They point out that principal credit lies with the Turkish Intelligence (MIT) and not Qataris – who may have played a supportive role.

It is these links that may have helped Doha in helping Turkish Intelligence and Italian authorities mediating the release of abducted Italian aid worker, Aisha Romano (formerly Silvia Romano), who was held captive by the militant group Al-Shabaab for years.

Earlier, Italy cheered the liberation of Silvia Romano, an aid worker who returned to Rome after being held captive for 18 months in East Africa by Somali militants connected to the Al-Shabab terrorist group.

According to Turkish security sources, Romano, 25, who said she converted to Islam after reading the Qur’an while in captivity, was rescued after a joint effort by Turkey’s MIT intelligence agency and Italian and Somali government authorities.

Investigative sources quoted in the Italian press said Romano, a volunteer at an Italian-run orphanage in Kenya, had been located in December.  And she was handed to Italian authorities in Somalia on Saturday after being freed during a thunderstorm near the capital Mogadishu.