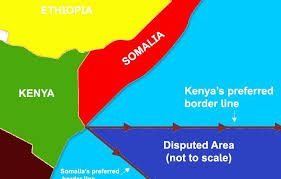 The Kenyan government is reported to have reached out to the International Court of Justice (ICJ) to request an extension to the date of the hearing of the maritime border dispute that has been ongoing for years.

According to a report by Somalia’s Albanaadir Press, the government reached out to the ICJ to seek another extension owing to the fact that the Covid-19 pandemic had wreaked havoc in its plans to defend itself

According to the reports, the Somali government has strongly opposed Kenya’s plans to delay the maritime trial and accused Kenya of seeking to resolve the dispute outside the court.

The press claimed that the statement sent to the ICJ by the Somali government in rebuttal asked that the hearing takes a visual format using modern technology to deny Kenya’s excuse.

Somalia argued that the major international lawsuits brought to the ICJ had already been heard and determined in audio and video formats, and called on the ICJ to never postpone the hearings.

The ICJ in November 2019, agreed to push forward the maritime dispute between the two countries to June 2020 after both countries presented their submissions.

“The International Court of Justice (ICJ), the principal judicial organ of the United Nations, has decided to postpone to the week beginning 8 June 2020 the oral proceedings in the case concerning Maritime Delimitation in the Indian Ocean (Somalia v. Kenya).

“The hearings had initially been slated to take place between Monday 4 and Friday 8 November 2019.

“The Court took this decision having duly considered the views and arguments of the Parties to the case regarding a request of Kenya to postpone the hearings,” the notice by ICJ reads.

Somalia sued Kenya at the ICJ in August 2014, seeking to redraw the sea boundary to a diagonal flow, an extension of the land border south of Kiunga, and objecting to Kenya’s current view where the border flows directly eastwards.

If the ICJ agrees with Mogadishu’s view, the change in the boundary could affect about 100,000 square kilometres of sea, limiting Kenya’s access to the waters said to contain valuable hydrocarbons.