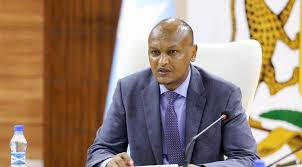 Somalia’s Federal Gov’t has rejected Kenya’s move which it sought to the International Court of Justice (ICJ) to delay the maritime dispute case between the two countries amid fears of Covid-19 pandemic. Somalia has accused the Kenyan government of willing to settle the maritime spat out of ICJ. The deputy PM of Somalia, Mahdi Mohamed Gulied, has said that the ICJ has issued a statement stating that it will continue to hear the court cases via interwise. The deputy PM has reiterated that Somalia has refused to allow the court to postpone the maritime spat for one day.  He added that Somalia’s government has made clear its stance to ICJ that it won’t accept the case to be delayed.