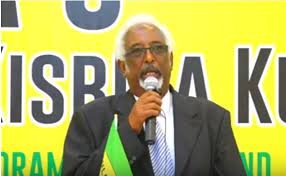 Mr. Ali Mohamed Waranade, Presidential adviser called upon the opposition parties WADDANI and UCID to put an end to suspicion and divisive practices in the fraternal Somaliland community.

Politician Waranade said he was deeply saddened by the chaotic acts that took place in Hargeisa, which was described as a peaceful protest, but later turned into an ugly tribal protest that turned violent and backfired.

Former high profile cabinet member Ali Mohamed Warranadde made the remarks at a forum where a number of traditional leaders and intellectuals gathered to discuss peace and development in the nation.

“I greet the esteemed community that have gathered here today to discuss how to bring peace, coexistence and freedom to their country, Somaliland, and how we can strengthen the golden tidings that God has given us, and turn our backs on anyone who tries to hurt our harmonious setting”, he said at the gathering on Friday.

He added, “I am very sorry to say here about the horrifying events that took place the other day during the protests, which at first looked like a peaceful one but later turned into a lot of violence that looked like a tribal protest”, and continued, “the city has four entrances, a protest that only came out of one door and really did not seem to be a national protest is not tangible”, attributing to the cosmopolitan diversity.

Politician Ali also called on the opposition parties, the members of the community the country to adhere to the constitution reminding them that it was incumbent upon the president to safeguard public order and security since they are his responsibilities.

“I have been working for 50 years on how to keep the peace, how to prevent the collapse of stability, and how to detect the intentions of ill-motivated individuals to take shape as far as security is concerned”.

“The police are trained to save the lives of civilians and to protect themselves in the event of an attack. Demonstrations, if armed, could lead to unprepared catastrophes. In order to prevent this from happening, I call on the leaders of the opposition and the President of the Republic of Somaliland to lay the groundwork for dialogue”, he appealed.

He continued, “Hargeisa is the capital of the nation and where the brotherly communities live in harmony. We need not hear one clan has protested or is preparing for an incursion.”