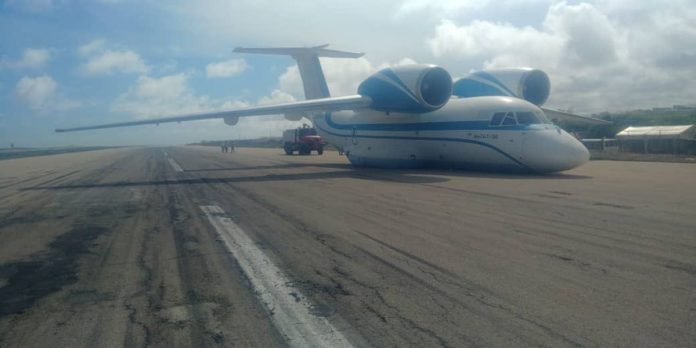 A cargo plane was forced on Wednesday to land on belly after its landing gear failed at Aden Abdulle Airport in Mogadishu, local media reports.

In a one-minute video captured by one of the witnesses, the plane is seen struggling to land, causing panic and anxiety within the busy airport’s vicinity.

For minutes, VOA reporter Harun Maruf said, the runway was temporary closed by the authorities to allow for emergency services at the airport.

But by 17:00 Hrs GMT, reports indicated, normalcy was restored at the airport which is the only one currently operational in Somalia due to political crisis between federal government and Jubaland leadership.

“Services returning to normal at Mogadishu’s Aden Adde International Airport after a plane landed on its belly following a landing gear failure. No injuries have been reported, investigation is underway,” reports indicated.

The bizarre incident comes amid ban imposed on aircrafts landing at the Kismayo Airport, which is the second biggest in the Horn of Africa nation.

On Monday, Somalia reported Kenya at International Civil Aviations Authority in Canada, following landing of an aircraft at the Kismayo Airport directly from Kenya.

“It sounds like a smear campaign to portray Kenya as bad. But we aren’t bad, we are a law-abiding state. In fact, the responsibility to police aircraft movement in Somali airspace rests with the Somali government,” said a senior official discussing the matter on background.

The ban targeted Jubaland President Ahmed Madobe’s inauguration, which was postponed last month due to federal government’s conflict with Madobe.

However, sources say that the plane carried dignitaries who are set to attend the former Ras Kamboni Brigade commander’s inauguration, whose date is yet to be announced.

All flights to Kismayo Airport must be cleared first at Aden Abdulle Airport thus tge congestion. Kismayo Airport is at times used for alternative landing in case of emergencies.