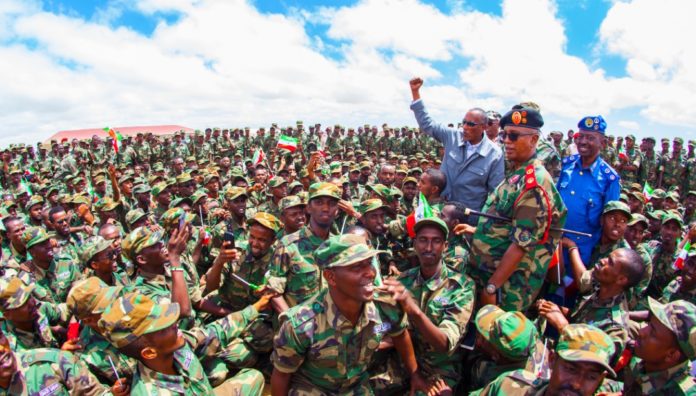 126 students who successfully completed the training at the national service program yesterday were officially admitted into the various departments of Somaliland’s armed forces. The official induction ceremony of the armed forces of the men and women who have accomplished the training saw the attendance of national army operational commander, Brigadier Abdirisak Said Bulale, the custodial corps deputy chief, brigadier Hasan Ali Awad and other senior officers from the police force and the custodial corps. The National Service program Director, Mr. Mohamed Husein, speaking at the function, said that it was a great opportunity for these young students whereby others did not have that golden chance. He asserted that it is not an easy job to join the armed forces and being recruited as officers. 112 are males while 14 are females and opted to formally be part of the police forces, defense forces and the custodial corps in Somaliland. The incumbent Somaliland president Musa Bihi Abdi instituted the program and pledged during the presidential campaign that if he is elected to the presidency, that he will launch the program. It was an opportunity for young Somaliland  men and women to serve for their nation. The first optional national service was the first of its kind to be introduced in Somaliland since its inception in 1991. The program recruited university graduates from all across Somaliland. The young men and women were cordially welcomed to the armed forces by the officials who attended the induction ceremony.