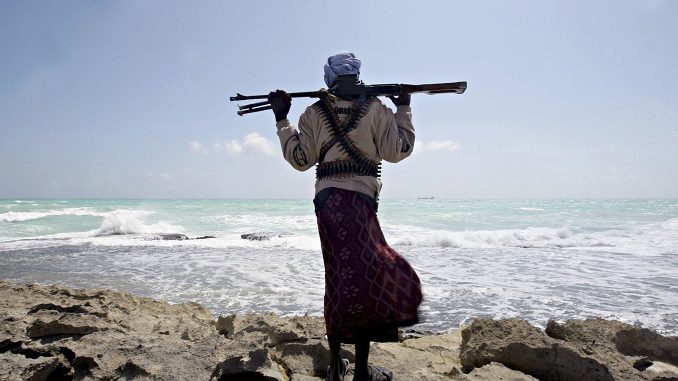 Two days later, the dhow was used as a mothership to deploy skiffs for an unsuccessful attack on the South Korean fishing vessel Adria. The Spanish fishing vessel Txori Argi came to Adria’s aid. According to a European Union Naval Force (EU NAVFOR) Operation ‘Atalanta’ statement released on 24 April, the pirates fired at both vessels with what appeared to be a rocket-propelled grenade, but the presence of armed private security teams onboard both vessels deterred further attack.

A third fishing vessel, Shin Shuen Far 889, was also reported to have been approached by skiffs later that day, but again the attack was deterred by armed private security team presence.

A team from Navarra boarded the dhow, apprehended five suspected pirates, and freed the Yemeni crew. EU NAVFOR reported that all hostages were unharmed.

According to the EU NAVFOR statement, “[the] incident is the first notable piracy event since October [2018].”

“This incident clearly demonstrates that piracy and armed robbery at sea, off the coast of Somalia, has not been eradicated,” said ‘Atalanta’ operational commander Rear Admiral Antonio Martorell, from the Spanish Navy. “The need for a strong maritime security presence in the High-Risk Area [off Somalia] remains critical for the deterrence and prevention of future incidents.”

The attacks took place three weeks after operational command of ‘Atalanta’ was handed over from the UK to Spain, with the headquarters relocating from Northwood, UK to Rota, Spain.