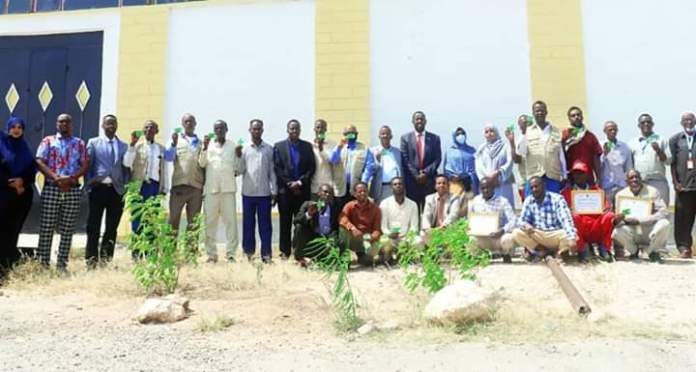 A graduation ceremony was this week held for 27 government-employed drivers after the completion of their various training courses at the state-owned driver’s school managed by the Ministry of Transport and Road Development.

The head of the government-owned drivers’ training school, Mr. Said Tallabo and Mr. Muse Yusuf Ibrahim, the director of the transportation department at the ministry of transport and road development speaking during the event said that during the training the drivers undertook lessons that will benefit them in their work. The two officials further urged them to make use of what they have learned during the course of their training.

The director of the license department in the ministry of transport and roads development, Ms Ayaan Abdiaziz Mohamed said that the license issued to them was an important one made specifically for them. “You are required to not share this license with anyone else, not even with your superiors. The number of drivers issued with this special license is 27, said Ms. Ayan Abdiaziz Mohamed.

The vice-chairperson of the Somaliland Refugee and Internally Displaced Agency Ms. Fadumo Abdillahi and Mr. Abdikarim Mohamed the vice-chairperson of the Somaliland Civil Service Commission welcomed the training of government-employed drivers and the launch of the new state of the art licenses. They lauded the Ministry of Transport for the Job well done.

Col. Mohamed Elmi, the Commander of Somaliland Traffic and Road Safety Police said that from now on they should be able to tell apart the difference of a government-employed driver and a civilian one.

The Director-General in the Ministry of Transport and Road Development Somaliland. Omar Abdulahi Adan (Omar-Sayid) said, “When we approached the civil service commission to inquire how many drivers were in the government payroll, we were handed a list of names of 423 drivers who we plan to issue with the new driving licenses with GIB card.

“I would like to announce we shall be collecting back the paper license issued previously to government drivers and in turn, we shall issue them with new state of the art license,” said the director general in the Ministry of Transport.

Lastly, the certificates were awarded to the drivers, and at the same time issued with the new Somaliland government’s traffic driver’s license.