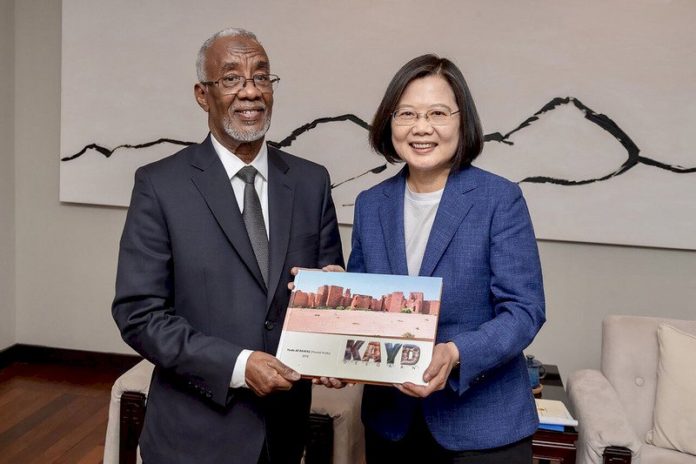 Taiwan is set to open a liaison office in Somaliland capital Hargeisa as part of long term involvement in East Africa.

Taiwan Minister of Foreign Affairs of Taiwan, Jaushieh Joseph Wu said his government is seeking to promote cooperative relations with African nations and expand its engagement with East Africa

At a press conference in Taiwan capital after holding lengthy talks with Somaliland foreign affairs minister Yasin Haji Mohammed, Wu said in the spirit of mutual assistance for mutual benefit, Taiwan and Somaliland will engage in cooperation in areas such as fisheries, agriculture, energy, mining, public health, education and ICT.

“An agreement has been reached with the Republic of Somaliland on the mutual establishment of Representative Offices based on bilateral friendship and a shared commitment to common values of freedom, democracy, justice and the rule of law,” Wu said.

Minister Wu expressed confidence that with the support of the two governments, the mutually beneficial and friendly ties between Taiwan and Somaliland will be further deepened.

At the same time, Somaliland President Musa Bihi Abdi will soon dispatch a representative to Taiwan in a bid to forge long term ties between the two states.

“Taiwan has gradually cultivated cordial interactions with Somaliland since 2009. The two sides have collaborated on enhancing maritime security, healthcare and education,” Wu said.

He added that through the Healthcare Personnel Training Program of the International Cooperation and Development Fund (TaiwanICDF), Taiwan previously provided training to 23 medical professionals from Somaliland.

Currently, three young students from Somaliland are pursuing academic degrees in Taiwan under the Taiwan Scholarship program. In addition to government endeavours, Taiwan non-governmental organizations have also been active in Somaliland.

In January this year, Taiwan Root Medical Peace Corps sent a delegation to Somaliland for the third time to conduct free clinics in 10 regions, serving a total of 2,880 patients.

Wu stated that the Somaliland government fully recognizes the Taiwan Model of international cooperation and seeks to learn from Taiwan’s experience while continuing to deepen collaboration with Taiwan.

“The government of Taiwan supports the Somaliland government in its efforts to advance democracy and freedom. Taiwan is more than willing to implement development projects focused on capacity building through the Taiwan ICDF in order to benefit the Somaliland people. Based on steadfast diplomacy, Taiwan is committed to showcasing its spirit of international fraternity.”

Somaliland is situated in the Horn of Africa, with a population of 3.9 million people. The country possesses rich fisheries resources and nearby waters serve as important international fishing grounds.