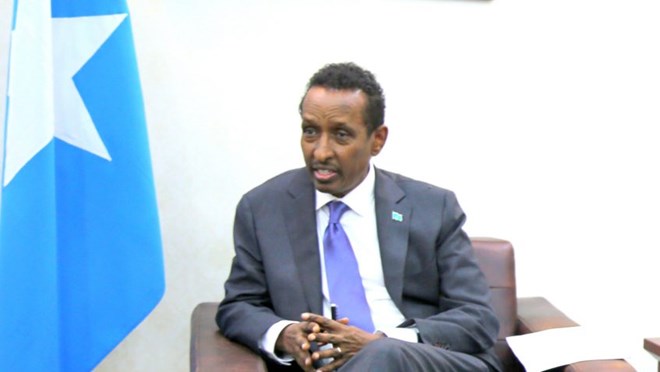 The relationship between Kenya and Somalia continued to deteriorate even as a verdict on the maritime boundary dispute between the two neighbours draws nearer.

In a diplomatic letter sent to Somalia on May 21, Kenya threatened to use force if Somali citizens continued to obstruct or destroy the fence it is building along the two countries’ border.

“Any continued obstruction or destruction of the fence shall be responded to forcefully,” stated the letter signed by Kenya’s foreign ministry and delivered by Kenya’s mission in Mogadishu to Somalia’s ministry of foreign affairs on May 25.

In the letter, Kenya accuses Somalia of “continuously” obstructing the construction of the fence and using women and children to cause harm to security personnel and construction teams.

“Kenya is assessing the cost of damage caused by Somali citizens with a view of demanding compensation,” stated the two-page letter seen by The Standard.

In the letter, Kenya accuses Somalia of not reciprocating its goodwill.

“When Kenya suspended the construction of the fence for two weeks in 2017, it exhibited the highest level of patience, good faith, friendship and good neighbourliness.

“It is Kenya’s expectation that Somalia will reciprocate by taking appropriate action to ensure that Kenya’s border security is not obstructed or in any way inhibited by the actions of its citizens,” stated the letter.

Kenya, however, said it was ready and committed to undertaking what it described as “a boundary reaffirmation exercise” at the earliest opportunity as long as the matter was communicated through proper diplomatic channels.

Somalia has, however, denied that it is frustrating Kenya’s efforts to secure its border.

“The government of Somalia categorically rejects the allegation that it is in any way involved in the alleged conduct described in the aforementioned Note Verbale,” said Somalia in response to Kenya’s letter.

Somalia proposed the formation of a technical and legal working group to iron out any differences between the two countries.

On the maritime border dispute that is currently pending before the International Court of Justice (ICJ), Somalia said it would respect Kenya’s borders and expected the same from Kenya.

Between the lines, the letters spoke volumes of a diplomatic tussle between the two neighbours.

The Kenyan government has since ordered planes originating from Somalia to first land in Wajir.

On May 28, Kenya also banned unaccompanied luggage on planes from Somalia. Kenya is also said to have drawn a list of 66 Somalia officials banned from entering the country.

The secret list, whose existence The Standard learnt of from a source who didn’t want to be named, contains the names of a Somali Cabinet minister, a former prime minister, a member of parliament, the deputy head of Somalia’s intelligence agency and the owners of a telecommunication firm.

Kenyan nationals of Somali origin, some of whom are from the same clan as that of President Mohamed Abdullahi Mohamed Farmajo are also included in the list.

A source at Somalia’s presidency told The Standard on condition of anonymity that Mogadishu is bracing itself for more restrictions by Kenya against its officials and business people ahead of the ICJ’s verdict.

Somalia’s Foreign Minister Ahmed Isse Awad, however, told The Standard that Mogandishu was not ready to escalate the diplomatic tiff.

Awad laughed off reports that Kenya was aligning itself with Somalia’s regional administrations, particularly with the northern-western Somaliland region.

“It is the Somali government that gave Kenya the permission to set up a consulate in Hargeisa,” he said, referring to the region’s capital.

“Kenya has also allowed us to open a consulate in Mombasa if we want to,” he said.

The ICJ’s final decision on the maritime boundary row between Kenya and Somalia is expected next year.

Should Kenya lose the case, it will lose about 100 square kilometres of waters rich with natural resources.