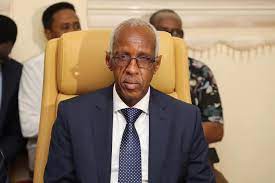 Somalia’s federal government is not aware of the airlift of hudreds of troops to the restive town of Baladweyne in the central region of Hiran, where tensions inflamed by reports of a regional president’s planned visit sparked protests and a buildup of troops, the Minister of Interior Mukhtar Hussein Afrah said on Wednesday.

Planes carrying hundreds of Turkish-trained special forces landed at an airport in the town of Baladweyne on Wednesday, a day after the town had been rocked by protests against a planned visit by Hirshabelle president Ali Gudlawe.

Somali Interior Minister told a press conference in Mogadishu that the cabinet and the Prime Minister were not aware of the deployment of troops to the town and warned against use of military force to bring an end to the simmering tensions in Hiran region.

Other politicians who come from the region, including former Education Minister Abdullahi Godahar Barre and ex-spy chief Abdullahi Mohamed Sanbalolshe said hundreds of troops had been deployed to Baladweyne in an attempt by the incumbent President Mohamed Abdullahi Farmajo to rig elections for 25 parliamentary seats.