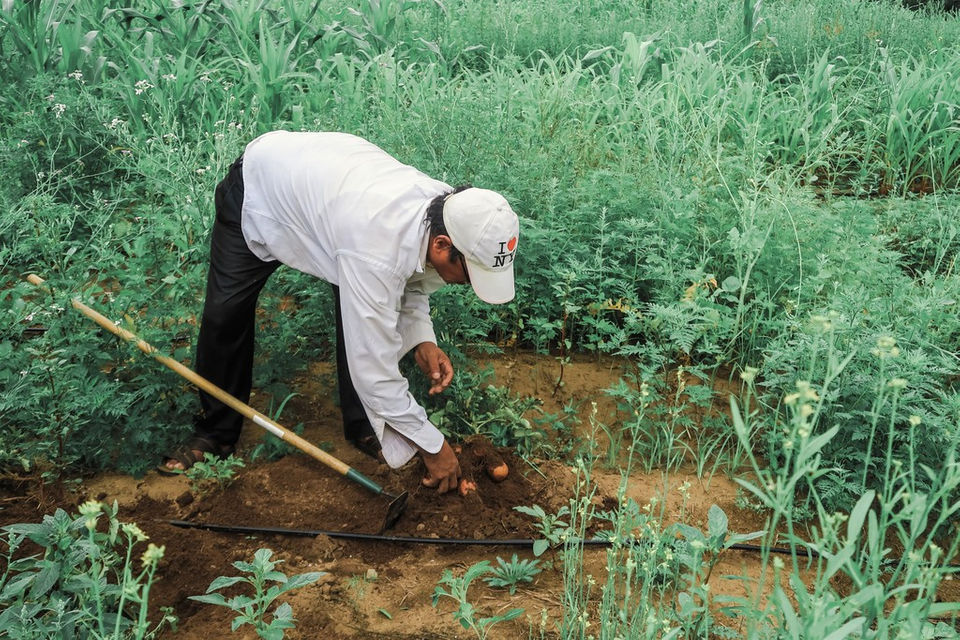 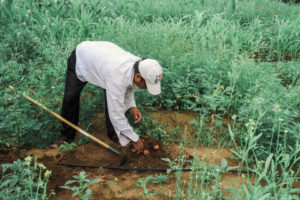 Ahmed Abdirehman digs up a bunch of lettuce as the sun beats down on his neck.

He replants the lettuce on the other side of his plot of land at Salt City Harvest Farm, a 32-acre farm 12 miles outside the city of Syracuse. He planted them too close together, stunting their growth.

He wipes sweat off his brow and chuckles. “I don’t know farming,” he says.

He came from a family of farmers. Now, he’s learning how to farm the American way because he wants his own farm to grow organic produce.

He’s one of 18 participants in the Syracuse Refugee Agricultural Partnership Program, a three-year program teaching refugees living in Syracuse how to farm, sell produce and launch a farm business.

Now in their second year, Abdirehman and 10 other members from the inaugural class received an eighth of an acre at Salt City Harvest Farm in Kirkville, east of the city of Syracuse. This plot works as a training ground where participants grow and harvest their own produce using what they learned from the program’s agriculture classes.

This summer, they’re harvesting what they planted–lettuce, tomatoes, corn, green beans and potatoes, to name a few–and selling them on their own at the Refugee Farmers Market, the program’s newly-launched market on Lodi Street, as well as the CNY Regional Market and the Downtown Farmers Market.

Brandy Colebrook, 36, the program’s coordinator, says groups of refugees from organizations like Syracuse Refugee and Immigrant Self-Empowerment, the non-profit that launched the program, outgrew the community gardens they started in the North Side.

With the influx of refugees–5,658 in metro Syracuse from 2009 to 2014, according to New American Economy’s 2017 report–the non-profit had to expand its opportunities.

Many of these refugees–who come predominantly from Somalia, Bhutan, Nepal and Democratic Republic of Congo–were farmers in their home country. They wanted their own farms here to make extra money, but didn’t know where to start, Colebrook says.

With a $99,655 three-year grant from the U.S. Office of Refugee Resettlement, Haji Adan, the non-profit’s executive director, and Jessi Lyons, a farm coordinator at Brady Farm, were able to start the agriculture program.

Participants take classes on farming practices used extensively in this country, such as irrigation systems and soil sampling in the first year, Colebrook says. Kayo Green, an urban agriculture educator from Cornell Cooperative Extension of Onondaga County, teaches them at a community center in North Side.

At Salt City Harvest Farm, they learn how to farm their own plots. They spend eight hours weekly in the second year to plant, tend to or harvest their produce. By the third year, they can grow more produce, learn how to write business plans and find loans and land to start their own farm.

Colebrook finds most of the learning takes place through trial and error outside the classroom. It’s the first time participants are farming land in temperate conditions using Western techniques, she says.

Aaron Bodine, 23, Salt City Harvest Farm’s assistant manager, says they help set up irrigation systems and participants’ plots prior to planting. They manage their own plot after that.

On his plot in Kirkville, Abdirehman is still figuring out how to best grow his produce. He’s growing corn, tomatoes, beans, lettuce and watermelon. He chooses what to grow and sell.

He sees a small cucumber peeping out form the vine’s large leaves and yells with excitement. He didn’t realize he was also growing cucumbers.

Colebrook says they don’t have to follow their teachings. Most use farming methods from their home countries, including growing four plants next to each other, with Western practices they learn from the program.

Lyons, their marketing educator, teaches them what kind of produce Americans buy and when to harvest them.

At the farm, she points out that Americans like their green beans small and thin if they’re going to eat them fresh.

If they want customers to buy their produce, it must look appealing.

Participants who understand the most English help translate these teachings. Educators also use hand gestures to explain farming techniques.

But the Refugee Farmers Market on Lodi Street lets them practice selling produce on their own. The diverse refugee and immigrant population in North Side forces them to speak English because it’s a common language among refugees in the area.

The farmers market on Lodi has been difficult to manage, Colebrook says. They aren’t getting enough people to sell from 3 p.m. to 6 p.m. on Mondays.

But participants need to find more time during the day. Most of them work outside of the program. Some are stay-at-home mothers seeking extra income to support their family.

Abdirehman wakes up at 5 a.m. every day to start his job as a taxi driver. On weekends, he also serves food at Upstate Medical University from noon to 8 p.m. In between, he drives to Kirkville to check on his farm and harvest produce to sell or bring home to his family of nine.

He says he’s not tired.

“In this country, if you don’t work hard, then it’s not good for you,” he says. “My dream is to have my own farm.”