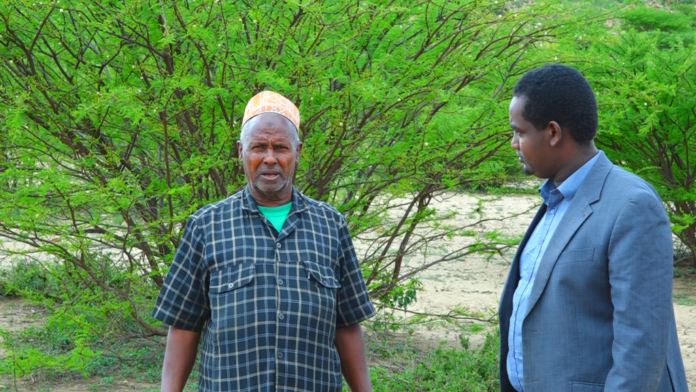 The story of one unfortunate and sad farm that the British split into two, keeping one side of the farm in Borama, Somaliland and the other side of the same farm to Ethiopia is very popular among the Somali speaking population across the horn of Africa.

Residents of Borama refer to this farm as Beerta Ayaan Daran, the unfortunate farm. The border between Ethiopia and Somaliland is right in the middle of the farm.

A tree at the centre of the farm signifies the official border between Awbare district, Ethiopia and Borama in Somaliland

Half of the farm is located in Ethiopia while the other half is in Somaliland.

All over the world borders are sealed with fences, highwalls, immigrations and cutsoms, but here in this farm crossing the border is literally taking a step over a tree in the middle of the ranch.

To the left is Ethiopia, while to the right is Somaliland.

This amazing farm, which perhaps is the only one of its kind along the entire horn of Africa lies on the road, on your way to Borama town from the agricultural municipality of Gebiley.

Unless you are told by the locals, you will think its just any other farm. There are no physical features marking the official boundary between the two countries, and the farm stretches deep inside both Ethiopia and Somaliland.

Abdi Amir is the third generation family manager of the popular farm.

He was born on this farm in 1940 and this farm existed long before his birthday.

He says “My father and two of his brothers owned it together all this time. Where we are standing is the middle of the farm and actually the border, here in Ethiopia and this other side is Somaliland”.

Long before the civil war, the farm used to produce maize, beans, peas, onions, and many other vegetables.

But because of the effects of climate change and global warming, not much is produced here today. It is a large piece of uncultivated land.

“While I was growing up, we used to farm corn and soybeans. We later farmed almost all vegetables from maize, beans, peas, onions, and many other vegetables.

He now appeals to agencies and organizations to help them with the equipment required, otherwise, he says they will cultivate their land.

“Somaliland would have been food secure and it would have helped us as well” tells me the former Soldier.

And where does his loyalty lie, between Ethiopia and Somaliland I ask?

“I am a citizen of both countries, and the border can not stop me, he tells me.

The Ethiopian government can not stop me because my farm stretches deep inside the Ethiopian side of the border and for Somaliland, I was born here.

He counts himself a very lucky man. “If I become honest and loyal to both countries, No one can stand my way”.

Europe’s arbitrary post-colonial borders left Africans and people like Abdi bunched into countries that maybe don’t represent their heritage, a contradiction that still troubles them today.

These borders are widely considered the arbitrary creations of colonial happenstance and European agreements.

After the colonial powers left the continent, new rulers in Africa made the decision to keep the borders drawn by former colonizers to avoid disruptive conflict amongst themselves.