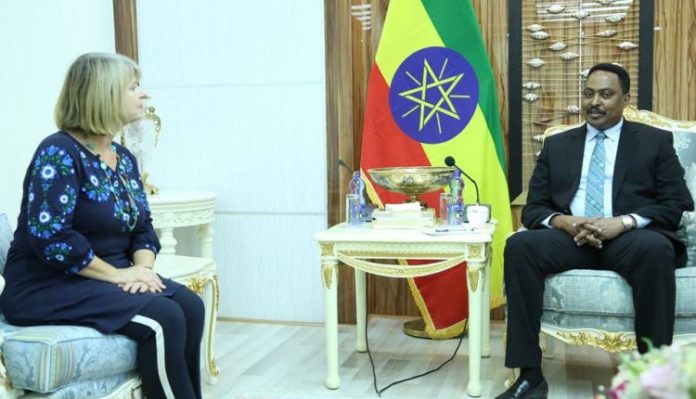 Dr Workneh appreciated the long standing and historical relations between the UK and Ethiopia, thanking UK government’s support to Ethiopia during a time of reform process in the political and economic frontiers.

He highlighted Ethiopia’s commitment to bring about democratic changes by managing to bring all armed opposition groups abroad to be part and parcel of the ongoing reform agenda in the country.

The Minister underscored that normalization of relations between Ethiopia and Eritrea has impacted the Horn of Africa region towards normalcy, peace and stability, which he says, has served as bedrock for collective peace, security and prosperity of the region.

Mrs. Harriet Baldwin on her part commended the myriad of steps undertaken by Ethiopia for the reform process to be successful and ensured the Minister UK’s continued support to Ethiopia’s reform agenda.

She said, “We fully support what you’re doing in Ethiopia” adding, UK appreciates Ethiopia’s efforts towards ensuring peace and stability in the region and its diplomatic moves in the Ethio-Eritrea historical peace deal that has ushered a new wind of hope for peace in the Horn.

The UK was among the first countries to open an Embassy in Addis Ababa, while Ethiopia was the first African country to establish an embassy in London, according to the Ministry of Foreign Affairs.