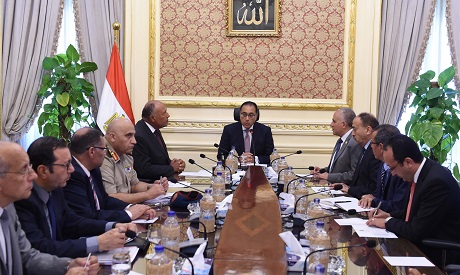 The committee discussed several phases of the lengthy trilateral negotiations on the GERD, which yielded ‘no agreement’, according to the cabinet

The Supreme Committee for Nile Water (SCNW) convened on Wednesday under the chairmanship of Egypt’s Prime Minster Moustafa Madbouly and the attendance of Foreign Minister Sameh Shoukry and Minister of Water Resources and Irrigation Mohamed Abdel Ati, as well as a host relevant experts, representatives of the state ministries concerned, the General Intelligence Service (GIS) and the Administrative Control Authority (ACA).

‘The futile negotiations prompted the Egyptian side to put forward a technical proposal which takes into account Ethiopia’s energy needs without detriment to Egyptian water interests’, the Cabinet said, without further explaination to the details of this proposal.

The committee asserted the need to wrap up the negotiations as scheduled, especially after a six-party meeting among the foreign and water and irrigation ministers of Egypt, Sudan and Ethiopia has been delayed from August 29-30 to September 25-26 upon the latter’s request, the spokesman noted.

Last April, Egypt’s Minister of Irrigation and Water Resources and Mohamed Abdel-Ati said that negotiations on the Ethiopian Grand Renaissance Dam (GERD) are continuing, although ‘no new developments have been reached’.
The minister said that a meeting in Cairo of the irrigation ministers of Egypt, Ethiopia and Sudan has been postponed due to the recent events and changes in the government of Sudan.
The ministers were set to seek an agreement on GERD filling and operation rules.
Ahram