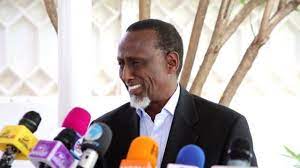 Dr. Mohamed Abdi Gaboose, one of the senior Somaliland politicians, called on the society and the political parties in the country to overcome political differences, which are not in the interest of the people, the government, and the country of Somaliland.

Dr Gaboose, who was interviewed by SAAB TV yesterday, said he was awaiting the Supreme Court’s decision, when asked if he is ready to launch a new association.

“Everywhere I go people (intellectuals) tell me that the country needs you and don’t leave politics. So when the court announces it’s the decision, I will disclose my decision if I will open an association or not.” He said

Dr Gaboose called on the government and the national parties to abide by the decision of the Constitutional Court, which will currently expected to issue its verdict in Rule 14,   disputed  among the members of the House of Representatives.

Dr. Mohamed Abdi Gaboose said that opening up associations is a matter of constitutional, and earlier himself and other politicians have been imprisoned for some time in their quest for exercising their right to organize political associations; though, now he is one of the politicians who are not currently in the three national parties in the country.