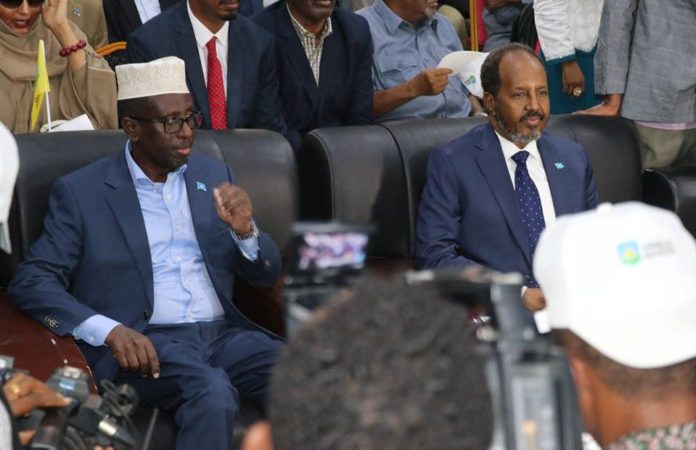 Former Somali president, Hassan Sheikh Mohamud has warned the Somali state will not be a democratic if the authorities in power resort to using authoritarian culture against dissidents and civilians.

Mr. Mohamud was addressing a political rally of Himilo Party on Saturday in Mogadishu. The party is led by former president Sharif Sheikh Ahmed.

“Tough measures against civilians by a powerful leader is what has made this country to suffer for 30 years now and that rebellion that was born is continuing until now,” he said.

Mr. Mohamud noted how he democratically saved the people and the country from going into unneeded political doubt in 2017 when he handed the power to the incumbent Mohamed Abdullahi Farmajo following the hotly contested election.

He noted that he was following suit of his predecessor Sharif Sheikh who was the first to hold a nearly impossible election inside the country.

“I salute Sheikh Sharif to really insisting and holding that election in 2012 which was the first election to take place inside Somalia for 22 years,” adds the ex-president of Federal Government of Somalia.

However, he has unequivocally condemned a recent comment by president Farmajo who vowed to use tough measures against local youths who protested against killings of tuk tuk drivers in Mogadishu two weeks ago.

“If you try to silence them [the people] they will in anyway re-gather,” Mr. Mohamud said.

He praised the establishment of political parties in which he applauded as the rise of democracy saying that everyone who needs to seek power should go through democratic way.

The ex-leader also blasted the term ‘Qaran dumis’, a new term literally translates as ‘nation destroyer’ which was developed by the current administration to label its dissidents.

“To label qaran dumis on those who speak against anything against the Constitution is not acceptable and it is not a decent culture,” Hassan Sheikh Mohamud said.

The former leader’s state comes less than a week after a dozen of opposition lawmakers, political parties and independent politicians called the government to show tolerance to the political dissidents while cautioning against term extension for the incumbent president.

Those politicians made their statement from Nairobi, the capital of Kenya after the Somali security agents blocked their meeting in Mogadishu, according to them.