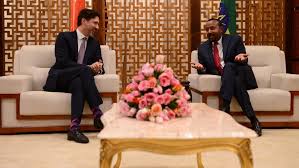 Canad’s PM arrived in the Ethiopian capital of Addis Ababa on Friday night where he will attend the weekend session of African Union.

It is a chance for the PM to meet directly with several of the 54 African leaders.

This is the Canadian third visit to Africa as PM but it is the first visit to Ethiopia.

He told Dr. Abiy Ahmed, the Ethiopian PM in a brief conversation at the airport that he intended to attend the African Union summit last year but he was not able to.

Abiy assured him this time was a better time.

Addis Ababa is a home to the African Union and has become one of the biggest diplomatic cities in the world.

Justin Truduae has praised the Ethiopian PM’s work to bring about reforms.

This year’s theme for the African Union summit is silencing the guns as Africa works to reduce violence and conflict and promote economic growth and prosperity.

PM Abiy Ahmed won the Nobel Peace Prize award in part of his work to strike a lasting peace deal with neighboring Eritrea.