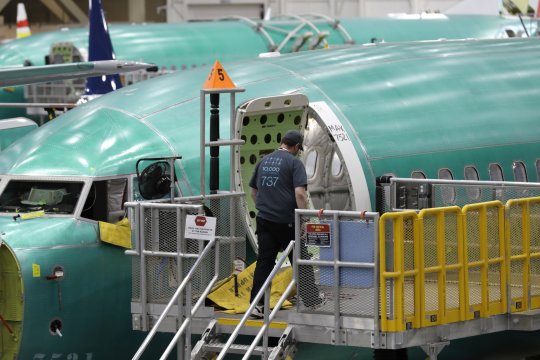 Boeing is cutting production of its 737 Max airliner after two crashes in the past five months which have killed 346 people. The firm is now focusing on fixing software issues, believed to be behind the latest disaster involving Ethiopian Airlines. The US-firm announced it will cut output from 52 planes per-month to 42 after the model was grounded by regulators following last month’s crash.

All 157 people on the Addis Ababa to Nairobi flight were killed. It came just months after a Lion Air crash in Indonesia killed 189 people. Preliminary reports into both crashes found the pilots struggled in vain to regain control after faulty sensor readings mistakenly triggered an anti-stall system which pushed the planes’ noses down. Boeing, which faces a growing number of lawsuits from families of the victims, also announced it is creating a special board committee to review the design and development of its planes. The company acknowledged ‘relatively minor’ second software issue that needs fixing has emerged on the Max, delaying its plans to get the planes back in the air.

A spokesman for the firm said the latest issue is not part of flight-control software called MCAS which Boeing has been working to upgrade since the Indonesia crash. Boeing chairman and chief executive Dennis Muilenburg said the production cut was temporary and was in response to the suspension of deliveries last month. He said the company was slowing down production now to avoid problems further down the road if fixing the planes took longer than expected. The company denies it has anything to do with airlines cancelling orders.

Indonesia’s Garuda Airlines says it will cancel an order for 49 Max jets. Other airlines, including Lion Air, have raised the possibility of cancelling. The Chicago-based company has delivered fewer than 400 Max jets but has a backlog of more than 4,600 unfilled orders, having previously planned to expand Max production to 57 planes per-month. Analysts say the lack of deliveries will eat into Boeing’s cash flow because it gets most of the cost of a plane upon delivery.

Boeing declined to provide figures, but undelivered Max jets have been stacking up at its assembly plant in Renton, Washington. The firm’s shares dropped by $3.93 to $391.93 on Friday, and then fell by a further $8.98 after news of the production cut.