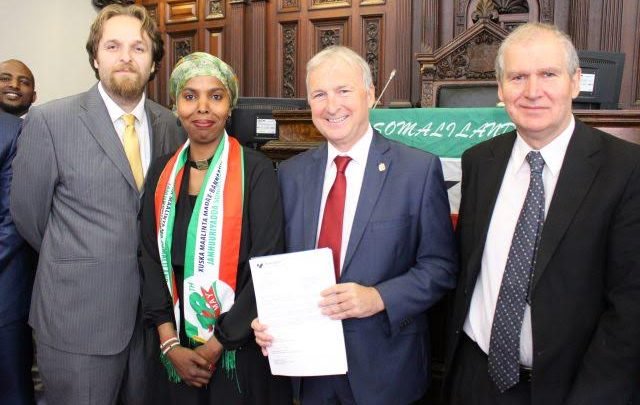 Pressure is mounting from within the United Kingdom to recognize its former colony Somaliland as an independent state.

Birmingham City is leading the way after its leaders signed a joint letter to unilaterally declare Somaliland independent of war torn Somalia.

The three main political party leaders; Council Leader, Councillor Ian Ward (Labour), Cllr Robert Alden (Conservatives) and the Council’s Lib Dem leader, Cllr Jon Hunt, were joined by Ayan Mahamoud, Resident Representative of the Republic of Somaliland to the UK & Commonwealth, as they signed a joint letter to Prime Minister Theresa May and Foreign Secretary Jeremy Hunt – urging the UK government to recognise Somaliland as an independent country – and be officially recognised as the Republic of Somaliland.

Somaliland,  a former British protectorate broke away from Somalia in May 1991 after the start of the civil war and has since been governed by democratically elected governments that seeks international.

Cllr Ward said: “Somaliland is a beacon of peace and stability in the ‘Horn of Africa’ and we have jointly signed this letter to urge Prime Minister May to officially recognise Somaliland as an independent state.

“Standing together as one, Birmingham is built by the multicultural community that has always represented the city.

“Somaliland”, he went on to say, “has been independent for 28 years. The time now is right for support from the international community”.

Leader of the Conservative Group on the Council, Cllr Robert Alden, added: “On behalf of the Conservatives I am absolutely delighted to support this letter, whilst leader of the Liberal Democrat Group, John Hurt, said: “Somaliland has long proved to be free and democratic – a real ‘beacon’ of equality and unity”.

“Thank you, Birmingham, for fully recognising Somaliland”, Ayan Mahamoud said. “This truly is a great day.

“For Birmingham to officially recognise the Republic of Somaliland is massive”.

“And a very special ‘Thank You’ also goes out to Keith Stokes-Smith, President of the Birmingham Commonwealth Association.

“I am proud that they, and the wider, colourful community of the Birmingham took the brave step of supporting an independent Somaliland.

“Birmingham, for one, is very special to us”.

She added: “A very special ‘Thank You’ goes out to Counill Leader Ward. He didn’t have to do this for us, but he did. That was a truly brave step by him”

Somaliland, Musa Bihi Abdi, expressed gratitude to Birmingham City Council for recognizing his country’s right to reclaim its independence and re-establish its place at international fora and the UN.

“It was a brave and bold step the honourable council of Birmingham has taken on Monday to endorse the sovereignty and right to reclaim its independence of Somaliland,” the President said in a statement released by his office, Tuesday.

“The City Council of Birmingham have, in this step, demonstrated a healthy and encouraging recognition of the Republic of Somaliland and my nation’s right to be fully recognized by the international community,” the President stated.

“On the same token, the people of Somaliland have been deeply moved by the city’s vote of approval, and are eternally grateful to the Council and the people of Birmingham,” he added.