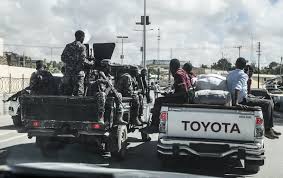 The Australian government has listed the Somalia operations of IS as a terrorist threat.

IS’s foothold in Somalia has caught the attention of the Australian government with the group’s ties there being formally denounced.

The Somali arm of IS has been listed as a terror group for the first time, after Parliament’s Intelligence and Security Committee signed off on a revised list of threats to Australia.

In a submission to the committee, ASIO Deputy Director-General Heather Cook said the militants could pose a threat to Australians – in particular those of Somali heritage.

“These groups, IS Somalia included, tend to target Westerners … for kidnapping for ransom purposes,” the submission reads.

“It’s not inconceivable that Australians of Somali extraction may be caught up in that sort of conduct.”

But she said this threat was yet to specifically target Australians visitors.

Five years ago IS began to establish influence in the northern African country.

A disenfranchised group of militants linked to Al-Qaeda adopted the tenants of the extremist ideology.

While US President Donald Trump declared earlier this year the total defeat of Islamic State after ousting the group from its territory in Syria, the threat does not appear to be over.

“There are certainly places where ISIS is more powerful today than they were three or four years ago,” he said.

Committee Chair Andrew Hastie told parliament on Monday the group has advocated for attacks against westerners and western states.

“We received evidence that Islamic State-Somalia’s primary objective is establishing an Islamic caliphate in the horn of Africa consistent with the global jihadist ideology,” he said.

The Intelligence and Security Committee estimated the group comprised of at least 200 fighters, who have carried out a series of terrorist attacks.

“Six terrorist attacks can be ‘reliably attributed’ to Islamic-State Somalia,” the report reads.

This included the assassination of multiple officials and Ethiopian Christians, an attack on a hotel, and detonation of an explosive device against a vehicle for a peacekeeping mission to Somalia.

The Home Affairs Department considers advice from ASIO on any group’s potential threat and links to Australia before terror listings are referred for review.

In this case the parliamentary committee agreed the Somali-based group and five others set to be re-listed should all be regarded as terrorist organisations.

This means Islamic State-Somalia, the Abu Sayyaf Group, Al Qaeda, Jabhat Fatah Al-Sham and Jemaah Islamiyah will be considered as such under the criminal code.

Mr Hastie said scrutiny must be applied to this process to ensure proper oversight of terrorist listings.

“The regulations mean that individuals associated with these terrorist organisations will be subject to serious offences,” he said.

“The committee supports the listing and re-listing of these terrorist organisations and finds no reason to disallow the regulations.”