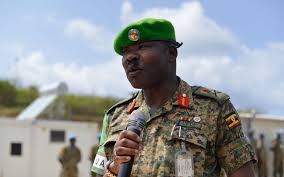 On Sunday Maj. Gen. Lakara visited Beletweyne, the headquarters of the AMISOM Sector 4, controlled by Djibouti troops, backed by Ethiopian forces, where he was briefed on the overall security situation and progress made in implementing the CONOPs.

The Deputy Force Commander in charge of Operations and Plans at the African Union Mission in Somalia (AMISOM), Maj. Gen. Nakibus Lakara has urged Djiboutian and Ethiopian forces to adhere to timelines in executing tasks under the Concept of Operations (CONOPs).

On Sunday Maj. Gen. Lakara visited Beletweyne, the headquarters of the AMISOM Sector 4, controlled by Djibouti troops, backed by Ethiopian forces, where he was briefed on the overall security situation and progress made in implementing the CONOPs.

The CONOPs outlines the activities AMISOM has to implement under the Somali Transition Plan up to 2021 when AMISOM is expected to exit and hand over the security responsibility of the country to the Somali Security Forces.

The Deputy Force Commander noted that while the Somali National Army (SNA) is building up its forces, AMISOM should go ahead with discharging its mandate.

“The SNA needs to be supported first of all to generate forces and this has been the focus, in line with the Transition Plan. AMISOM must handover to a capable force, able to defend the country when AMISOM exists,” Gen. Lakara noted.

Gen. Lakara was also briefed on measures being undertaken to counter the threat of Improvised Explosive Device (IED) which terrorists have been using. He appreciated the United Nations Mine Action Service (UNMAS) for the critical support in countering the threat of IEDs and urged the officers to be creative in the fight against terrorists.

Gen. Lakara’s visit to Beletweyne, about 340km from Mogadishu comes just days after a similar visit to Jowhar, the headquarters of AMISOM Sector 5, under the control of Burundi forces, and a forward operating base in Gololey, still under Sector 5.