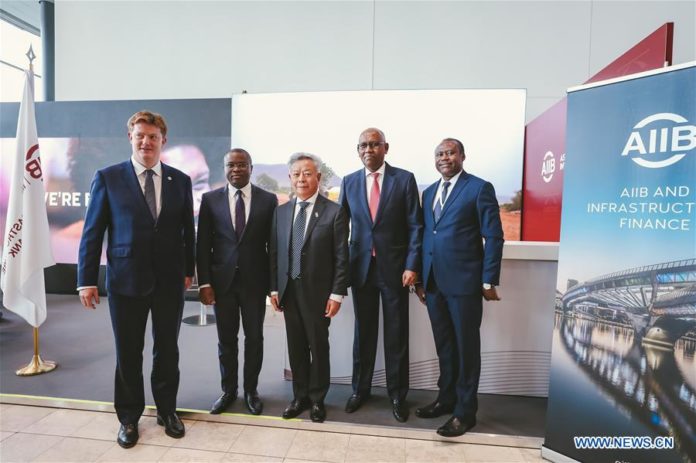 Jin Liqun (C), president of Asian Infrastructure Investment Bank (AIIB), Romuald Wadagni (2nd L), Benin’s economy and finance minister, Ilyas Moussa Dawaleh (2nd R), Minister of Economy and Finance, in charge of Industry of Djibouti, and Uzziel Ndagijimana (1st R), Rwandan Minister of Finance and Economic Planning, pose for a group photo during the fourth annual meeting of the AIIB in Luxembourg, July 13, 2019. The China-initiated Asian Infrastructure Investment Bank (AIIB) on Saturday approved the membership of Benin, Djibouti and Rwanda, bringing AIIB’s total approved membership to 100. The decision was made unanimously by AIIB’s Board of Governors at its fourth annual meeting held in Luxembourg. (Xinhua/Zhang Cheng)

The decision was made unanimously by AIIB’s Board of Governors at its fourth annual meeting held in Luxembourg.

The three prospective non-regional members will officially join AIIB once they complete the required domestic processes and deposit the first capital installment with the Bank.

In the meantime, AIIB’s Board of Governors elected Chinese Finance Minister Liu Kun chairman of the board.

With the amount of approved members expanding to 100, the volume of approved financing increasing to 8.5 billion U.S. dollars, AIIB has become an important member of multilateral development system, said Liu at the bank’s annual meeting.

Liu appreciated the progress AIIB has achieved during the last three years, underlying that AIIB has been granted permanent observer status by the United Nations General Assembly, issued its first U.S.-dollar-denominated global bond, as well as developed a series of important strategies and policies.

“AIIB members collectively account for 78 percent of the world’s population and 63 percent of global GDP. With the backing of all of our members, we are building a lean, clean, and green institution that can help to support their sustainable development,”said AIIB President Jin Liqun.

“AIIB was created by 57 founding members as a multilateral institution focused on supporting sustainable development through infrastructure. That another 43 members have joined in the last three years is recognition that AIIB has established itself as part of the rules-based international system, with strong governance and high international standards,” said AIIB Vice President and Corporate Secretary Sir Danny Alexander.

“We now have members on every continent, and we welcome the growing interest of African countries in AIIB. We look forward to working with Benin, Djibouti and Rwanda to support their development in the years to come.” he added.

Under the theme “Cooperation and Connectivity,” the two-day annual meeting of AIIB kicked off in Luxembourg on Friday, for the first time outside Asia, drawing over 1,000 AIIB officials, representatives from members and partner institutions, business leaders and experts.

According to the decision of Board of Governors, its fifth annual meeting is scheduled to be held from July 2 to July 3, 2020 in Beijing.

The AIIB, a multilateral development bank investing in sustainable infrastructure and other productive sectors in Asia and beyond, began operations in January 2016.