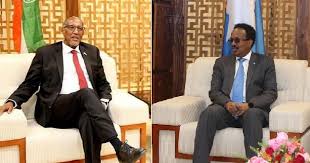 “Farmajo will not be allowed to come to Hargeisa as long as he does not acknowledge the independence of Somaliland as a sovereign nation”, thundered H.E. President Musa Bihi Abdi yesterday evening while speaking to VOA Somali Service radio.

The Head of State who was giving an exclusive interview to the international radio belonging to the US government spoke at length on various issues ranging from the stout public resolve to maintain, safeguard and achieve their Somaliland sovereignty through international recognition to the peaceful stability cherished and progressive development realized in the past three decades.

While the experienced VOA radio reporter Sahra Idle prodded President Bihi on various contentious issues calmly and diplomatically, the Head of State depicted oratory acumen that was articulate hence answering to the point each topic hence depicting a superb grasp of stewardship.

The President pointed out that the question of Somaliland being given the presidency slot as a bait of reuniting with Somalia was un-commonsensical given the fact that this country did not secede from Somalia but severed its former illegal, ill-fated and unfortunate union, hence re-asserted its nationhood-(Somaliland was a separate country which gained its independence from Britain several days before Somalia gained theirs from Italy).

The President lamented that since the international community brought the Mogadishu government back to the fold of the league of nations, Somalia asserted all her efforts in fighting Somaliland tooth and nail at every forum or any given opportunity such that it could stunt our development and way forward.

He said that this country would always play host to any Somali from anywhere on earth but a sitting Somalia president could not set foot in the country as long as they do not acknowledge the sovereignty of Somaliland.

He however reiterated for the umpteenth time that Somaliland was always ready and at hand to continue the stalled Somaliland-Somalia Talks in a scenario where international community attend as observers and intermediaries.

He defended his record in a couple of years that he is at the helm of the country’s stewardship and noted several developmental steps taken. He defended the country’s human rights records and ascertained the independence of the judiciary in a scenario where litigants a given free or pro-bono advocacy for those who could not afford it.

The President said that despite normal bottlenecks the country is being managed through diligence.

He noted that his administration had to separate state governance and contemporary oligarchy or traditional leadership to avoid overlapping conflicting roles.

He stated that governance is made possible through consultation with various entities as the clergy, youth organizations, women groups, intellectuals, or whatever stake holders thereof such that the needs of all the fabrics of the society may be fully incorporated.

The President gave a comprehensive re-cup of the ashes of ruins left by the Barre regime through bombardments while perpetrating genocide hence reduced to nothing all the major cities, medium seized towns and trading centres in the country- thus obliterating the essence of Somaliland in reality.

From scratch, he retold, how schools, residential houses, towns, and all infrastructural needs for social and public services-water, electricity, roads, hospitals etc -were reconstructed basically from scratch.

Having reached the present level and standard, three decades later, without any tangible international help, H.E. President Muse Bihi underpinned the fact that the people’s aspirations was there to be seen to prevail.

He pointed out that the peaceful stability and harmonious setting cherished is abounding not only within the country’s borders but the same tranquility is extended to safeguard the neighboring countries’ rights.

He revealed that the state would subsidize farming hence will also purchase products from the farmers thereafter, given the ample rains this season.

He said that the new Berbera Port will be completed by 2021, and that Berbera-Tog-Wajaale highway has had over 110 kms completed, the long Burao-Erigavo highway has only 60 km to go and that the Burao-Hargeisa road is next in the pipeline.

He said that the populace achieved what they cherish today through their togetherness and self-help.

He gave an example of the on-going fight against the COVID-19 as a pointer given that local entrepreneurs eked millions of US dollars from their own treasures to the cause of purchasing health implements and drugs to help their people and their country.

The country today boasts of cities, infrastructures, comprehensive institutions of learning and a telecommunications network that few countries have, given the vibrant trading in the country.