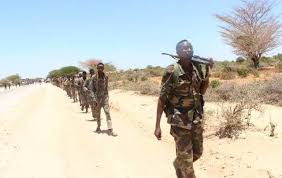 A powerful explosion hit a convoy of Somali national army north of the old textile factory of Balad some 30 km north of Somalia’s Federal seat Mogadishu.

The blast at place called Sayga was caused by a remote detonated roadside bomb.

Reports indicate that several soldiers were seriously wounded. No fatalities were reported.

Shabab usually the prime suspect in similar occurrences has yet to own up to day incident.

Recent fingers have been pointed at other actors in the devastating Somalia bombings for variety of reasons, among them is insurance to keep foreign aid following in.

The old middle Shabele region which is now part of the Hirshabele Federal State of Somalia has been a consistent battle ground for confrontations between Amisom and Somali troops in one hand and Al Qaida aligned Islamist fighters of Al shabab.

The attacks have become more frequencies gov’t and African troops supported by the US Africom have shifted its operations to Lower Shabele of South West Federal State of Somalia to the south and south west of Mogadishu.