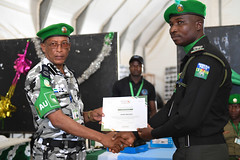 Mogadishu, 10 January 2020 – The African Union Mission in Somalia (AMISOM) on Thursday awarded medals to 160 police officers from Nigeria who have completed a year-long tour of duty in Somalia.

Further, Mulongo said, the officers of the Formed Police Unit (FPU)—the eighth contingent from Nigeria to be deployed in Somalia under AMISOM since 2012— would be remembered for “renaissance and reinvigoration of AMISOM dynamism” in carrying out offensive operations and building the capacity of Somali Security Forces in 2019 and 2020, and for leaving behind a “footprint and signature that will be remembered eternally.”

Mulongo commended the officers for their selfless sacrifice to help rebuild the Somali Police Force and also hailed the government of Nigeria for allowing the police officers to serve in Somalia.

“Today we can boast of a Police of Somalia that is capable of undertaking activities and tasks that they had never done before”.

Apart from deploying its officers to serve in Somalia, Mulongo said, Nigeria had played a pivotal role leading to the formation of the African Peace and Security Architecture and has also championed peace and security initiatives on the continent.

Present at the event was the AMISOM Police Commissioner, Assistant Inspector General of Police (AIGP), Augustine Magnus Kailie who praised the outgoing officers for helping build and transform the Somali Police Force into an institution capable of enforcing law and order.

“I have noted with delight that while performing these duties, members of this unit have been exemplary, diligent, committed and dedicated in the selfless service to humanity and the achievement of peace in Somalia,” Kailie said.