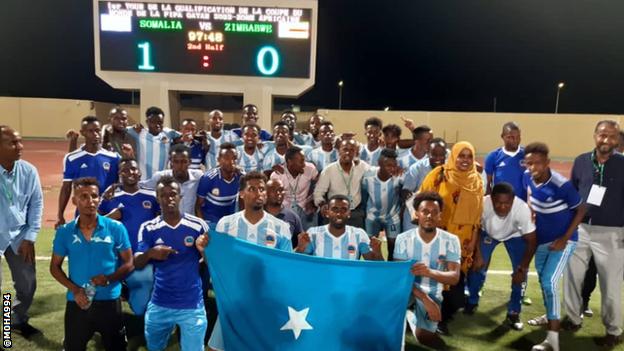 The Warriors beat Somalia 3-1 in a 2022 World Cup qualifier played at the National Sports Stadium in Harare on Tuesday afternoon.

All the goals were scored in the second half with Zimbabwe’s goals coming from Marshall Munetsi, Admiral Muskwe and Khama Billiat.

Today’s victory gave The Warriors a 3-2 aggregate win over the Ocean Stars and Zimbabwe will now participate in the group stages of the World Cup to be hosted by Qatar in 2022.

Zimbabwe drew first blood halfway in the second half when Munetsi scored an acrobatic goal from a corner kick. However, the lead was shortlived following a Somali goal against the run of play when Teenage Hadebe made a dreadful error to play the opposition through on goal.

Two quickfire goals in the final minutes of the match first from a deflected Muskwe free-kick and a Khama Billiat strike gave Zimbabwe the victory.