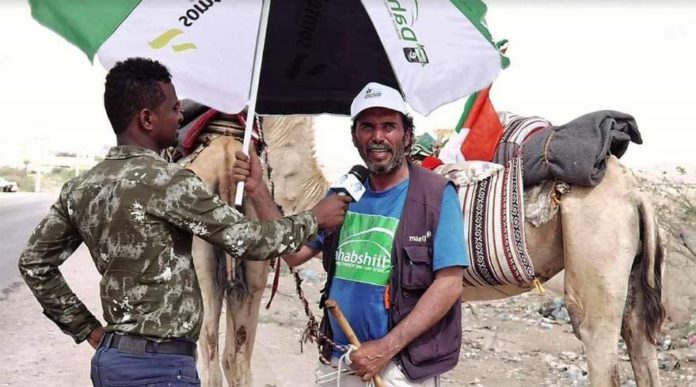 HARGEISA– The Yemeni national by the name of Mr. Ahmed Abdiweli Al-Qasami who treks continents by riding a camel has arrived in the republic of Somaliland. He travels on foot every four years once by using camel goes around the continents passing by many countries around the world. Mr. Al Qasam travels to many places during his trek.   Having traveled many countries by waving Yemeni, Somaliland flags and Dahabshiil logo, he said that he has seen that Dahabshiil firm has offices around many countries during his journey. He praised the firm’s officials while he received investments.

He kicked off his journey from Yemen and toured most of Asian countries on foot.   He used vessel to cross the territorial waters.  Mr. Abdikadir Al Qamari has joined Al Qassam in Hargeisa and will accompany him during his journey in the eastern regions in the country. The reason for trekking long distances on foot, he said that intends to broaden his knowledge and take photos from the landscape.   He has been traveling around the word for the past 25 years and commences the trek every four years once. Once he concludes his trek to SL then he will participate camel race which will tape place in the UAE.