Somaliland’s past leadership has been reluctant to send official delegation to Tel Aviv lest Arabs may shed crocodile tears on ‘the breakup’ of so-called Som-Arab brotherhood and destabilize Somaliland using religion as a weapon. But several Arab league member states either maintain direct cooperation with Israel on trade, education, and even Intel sharing. The Israeli flag proudly waves in the capitals of Egypt and Jordan and other Arab countries. In 2003, IMF and the World Bank Forum held in the Dubai, UAE, and the Israel’s flag defiant for eternity to the doomsday was waving at the cliffs of Burj Al Arab Hotel in my frown face while the UAE nationals cheered “dozens of US treasurers of Jewish origin have got time to visit us.”

Israel is a powerful member state of the world finance body, not a pariah as the hostile Arab media always misinforms about the State of Israel and Jews as whole. Arab guys, don’t tell us that Jews are at the war with Muslims in Gaza for trying in vain to dissuade us from making ties; because they are not, it’s falsehood.

Yes we are Muslims but Gaza Hamas war is a primarily a problem for Gazans, second of all, it’s an issue for the Palestinians, and thirdly, it’s An Arab problem for both Christians and Muslims—in my knowledge we neither Gazans or Palestinians nor Arabs—therefore it has nothing to do with us as much as we have nothing to do with Chechens or Kashmiris in India. Got it? Goodbye.

Mauritania developed ties with Tel Aviv however cut short. What’s so special about barren Somaliland that prevented to have relationship with Israel the only Jewish State on earth? Heaped antisemitism or Are there double standard Sharia laws that urge Arabs to play Judo with Israelis in Abu Dhabi? Is it because of the religion or the terror behavior of a medieval Sheikhdoms that refused to update itself with peace treaties signed with Israel by immediate Arab neighbors? Somaliland isn’t an Arab but a Muslim nation like Turkey. We’re not Arab by blood either in an ancestry or near immediate bloodlines of lineage. The story of Somalis of being Arabs was mere fabrication following the Siyad Barre’s greed dance with petrodollar folks.

Somaliland has an enormous water resources and yet dying of drought and of thirst because of lack of expertise and technical know-how.  Israel water engineers who are battling Californian expanding desert are waving at us but we looking the other way.

Al-sharqi Awsat earlier reported that Muse Bihi Abdi, an Interior Minister at the time secretly visited Israel trying to make him look bad by visiting Israel; he wowed Somalilanders; it was an impressive tour though never allowed to leak to the press to avoid mob riots. Can Somaliland’s leadership make a sound foreign policies and bring Israel water experts to the famished masses?

He is fortunate enough to be Somaliland’s leader and widely urged to do so again in the capacity of president defying the Arab countries he said they build small Madrasa in the country while his people overcrowd the Hargaysa’s surrounding graves for lack of healthcare for simple illnesses.

Somaliland need waters whatever means they can receive: via sea water desalination, cloud seeding or other unnatural methods. In the next few months half of the people will die if the famine remains persistent and the local corrupt Imams’ Rainy Prayers continue to fall on deaf ears. Somaliland needs final solution for its hydraulic crisis: given the miraculous agricultural experience in the Negev Desert, Israel can address Somaliland’s water crisis very easily. What holds us back is a prejudice and baseless fear. This time president Muse Bihi Abdi Somaliland is matured enough to bypass the Arabian lullabies that Jews are x and y; he’s ready to visit Israel instead of welcoming ex-Nigerian president for show-off to Somalia that Somaliland has some friends, an exercise in futility. Somaliland must address the absence of recognition scientifically by taking one a step at the time and alluring powerful states like Israel.

The UAE built a small borehole Xumbaweyne following the takeover deal of the Berbera seaport which failed to attract the Ethiopian shipping lines scary of the security shortcomings.

Somaliland claims to be in shortage of allies. If that’s the case, why Somaliland government officials don’t visit Israel and Taiwan? “Insanity is doing the same thing over and over and expecting different result,” Hargaysa has been chasing Arabs who isolated by banning her livestock to succumb to their illegal demands of the failed union with Somalia. The UAE whose DP World expelled from Djibouti is in control of the Berbera seaport but the irony they doesn’t have any diplomatic or trade office in the capital Hargaysa. They think we are stupid slaves and easily exploited through and ‘fake Arabism’ and faith card. Actually Somaliland looks static stone awaiting some godsend miracle to fall from above and all of a sudden, a prosperity would born out of it. through wise judgments and prudent decision God acts through it and helps them those who help themselves.  remember the world politics is dynamics and our mediocre second-rate leadership often say that in theory ” politics has no permanent friendship but a premanent interest.” Somaliland and Israel have intersection point to work together; let’s do it now.

On behalf of my people, I ask the Arabs to leave us alone after misusing us for so many years to see the world anew and meet Jews to dig water out and turn the burning black rocky mountains in my country so green. Using religion against our interests has gone; the prophet interacted with Jews and so do you, why not us? “Necessity knows no law.” We need Israel to work on mutual areas of development. Somaliland left the business of pan-Somalism let alone Arabs who shut down hospitals for politics when told we are not okay with your naked meddling in our internal affairs. Who unplugged electricity during child operation in the history of the world? Can Jews share a capital with such brutes who know nothing but hatred and murder? Who denounced such inhumanity? None of the Arabs. Israel is welcomed in Somaliland both countries are created May 4 and 18 respectively and has similar history of isolation.

ABOUT THE AUTHOR
The Writer and Journalist is a Somaliland Activist and Senior Editor at The Democracy Chronicles, African news edition; his upcoming novel ” How My Sex Shattered My Father’s Big Dreams.” a girl whose father wanted her to be a boy to fight for him and his tribe because females are burden and someone’s else comfort and sex object. 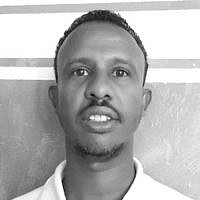