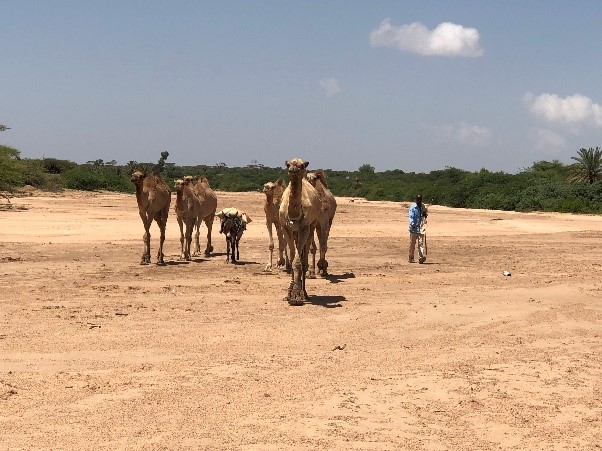 Camels can walk on water. I wouldn’t have believed if I hadn’t seen it with my own eyes. And if you don’t believe me, well, just look at the picture below to see camels walking on water in Somaliland! 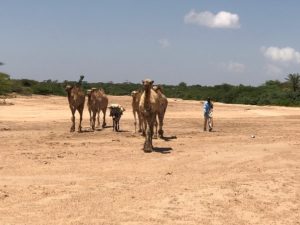 Yes, it looks like sand, but there is water right underneath their hooves. This is the brilliance of sand dams and subsurface dams, where sand effectively serves as a temporary reservoir cover, protecting the precious water underneath from evaporating under the blazing sun. Sand dams provide low-cost, low-maintenance, and replicable rainwater harvesting technology.

Scrape and scoop the thin layers of sand away with your hands and they’ll soon be plunged into life-giving and often life-saving water.

My companion for this incredible sight was Omar. People from his village call him Omar Shukri (Omar “the thankful”). Nicknames are common in Somali communities and this one is more gracious than some other hilarious monikers! It was certainly appropriate from my perspective as I was very thankful for his insights.

On a hot day in late September, we spoke while he watered his camel at Arabsiyo, Somaliland from a recently completed subsurface dam.

Like many of the people in his village, Omar lost most of his livestock in the 2016/17 drought, which led to 6.2 million Somalis requiring humanitarian assistance. Close to 400,000 cases of acute child malnutrition were recorded, and an additional one million people were displaced across Somalia. Losses in the livestock sector were estimated at US$2 billion, with people losing between 40 and 60 percent of their herd.

Omar is the father of ten, and his entire family were at the subsurface dam we visited. I asked him if there is water for the children in his tukul – a round hut with a cone thatched roof, common in East Africa – and he shakes his head. I follow with another question as to why his children do not drink before his camel does.  He pauses for a minute before responding: “If my camel survives, my children will survive.”

As the camel drinks, Omar goes close to the camel’s ear and whispers again and again and again. The camel seems to listen to him and responds to the whispers by licking Omar’s face. I ask Omar what he is saying to his camel and he replied that he is encouraging his camel not to give up hope. Why? I say. Because the camel is pregnant, he replies.

Omar’s is just one of many stories of what rural communities in Somalia have been going through for half a century. Somalia has experienced at least 14 severe drought events since 1960 – that’s around one every four years. Flooding is also a challenge for rural communities: just as Somalia was recovering from drought in early 2018, flooding in the Shabelle region displaced over 230,000 people and affected over 600,000 in April. There have been five major flood events between 2006 and 2018, impacting hundreds of thousands of people.

Omar’s eyes are small but radiant, and he looks at the far horizon as if searching for distant light.  I ask what he is thinking. He tells me that the new subsurface dam is like Shangri-La for him, but he quickly qualifies this by telling me I may not fully understand how much this means to him. He has lived through hunger, thirst, and weak and crying children around him.  So, he does not see a small dam but rather a deciding factor between life and death. It’s this daily reality for people like Omar that drives the World Bank’s work in Somalia.

I met Omar as part of my trip for a newly-proposed project which tackles water for agro-pastoral productivity and resilience.  It builds on a pilot intervention which taught us that if we want to contribute to the resilience of rural communities in a dry environment, we need to think about the multiple uses of water.  The Somali Water for Agro-Pastoral Livelihoods Pilot Project (WALP) used a grant of US$2 million from the State and Peace-Building Fund (SPF) to help the successful completion of nine small scale water infrastructure assets. In Somaliland and Puntland, these structures are serving more than 42,000 people.

Sand Dams and subsurface dams are not new in the Horn of Africa. The pilot is significant, however, because it is fully implemented by Somali authorities, from concept to implementation. The pilot confirmed that with the right support and the necessary means, Somali authorities can deliver public services to the often-marginalized rural population.

We have learned important lessons from the pilot.  These include the importance of using country systems in a post-conflict setting, the importance of institutions-building (as we say at the World Bank Water Global Practice “fix the institutions that fix the pipes”) and how we must work beyond service provision of water if we want to contribute to rural resilience.

These are the building blocks for the project my team is assessing now. Resilience is one of the pillars of the World Bank Group’s Country Partnership Framework for Somalia and one of the Bank’s Multi-Donor Trust Fund the Global Water Security & Sanitation Partnership five key priorities. This project illustrates why resilience is so important.

While my time with Omar was brief, the memory of it will remain with me for life.  Water services should improve Omar and his family’s health and make his livelihoods more resilient in the face of a changing climate. He should not have to choose between the two. The Bank’s water project will make sure that he will not need to.